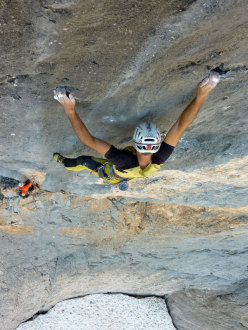 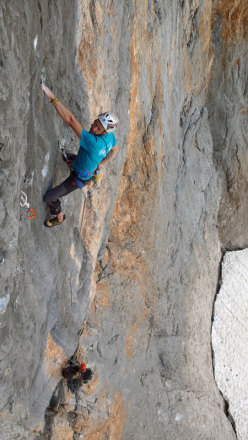 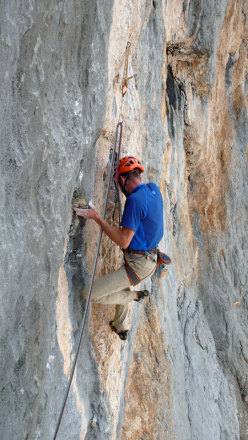 In July and August 2012 Italian climbers Rolando Larcher, Luca Giupponi and Nicola Sartori returned to Turkey's Aladaglar massif where they established and freed "Nessuno" (470m, 8a+ max, 7b obligatory) up the North Face of Cima Vay Vay and "Radio Eksen" (200m, 7c max, 7a+ obligatory) in the Cimbar Valley.

Aladaglar... we are beginning to get to know this area well. We know that in that mountain chain, deep within Turkey, there are mountains and rock faces which fuel the dreams of alpinists. So much so that those who have savoured its air seem unable to resist the call. This certainly holds true (has often held true) for Rolando Larcher. And also for his partners who joined him on this latest adventure, Luca Giupponi and Nicola Sartori; during July and August the trio established two new routes here, both beautiful and difficult. The first is called "Nessuno" (470m, 8a+ max, 7b obligatory) and takes a line up the great north face of Cima Vay Vay in the NE part of Aladaglar, the wildest, least known and most inaccessible area in this massif. The second route is called "Radio Eksen" (200m, 7c max, 7a+ obligatory) and takes a line through the narrow and overhanging Cimbar Valley canyon in the western part of this massif. Apart from the undisputed beauty and difficulty of these routes, what is worth knowing is also the story behind an objective of this sort, with everything which accompanies it along the way.

The story of the new route on Cima Vay Vay dates back to 2005. It was then that Larcher first heard about the great wall of splendid limestone from his friend Recep Ince - the alpinist and owner of the campiste that has always been the base for climbing expeditions in this mountain chain. Ince knows these mountains like the back of his hand, far better than anyone else and a year later the first "contact" came about. "I set off with Recep" explained Larcher "and after walking for two long days, having climbed over numerous passes, following no path at all and with only a rough map which ended 2/3 of the way there, we finally reached the Barazama waterfalls. We bivied ad the foot of the majestic Vay Vay amphitheatre and managed to photograph the face in the fleeting early morning light... At home I hung this photo up in my kitchen and I knew that, sooner or later, its time would come."

After countless breakfasts, lunches, dinners and even dreams, this summer the time finally came to remove the photo off the kitchen wall. Rolando Larcher, Luca Giupponi and Nicola Sartori set off from Camping Aladaglar located in the village Marti and theirs was almost like a true expedition, completed by Recep and four of his friends hired to work as porters. Larcher explains: "access to base camp is very complex, you have to cover circa 2000m of vertical height gain without a track worth mentioning. Moreover, the gorge narrows down so much that no pack animals can pass, except humans...". In short, with the 200kg load evenly distributed between all eight and after having left the car somewhere between the waterfalls and the village of Barazama, the "walk" ended 10 hours later at base camp. And there, at 3000m, is another clue as to why someone can be so in love with such cumbersome toils. For they were awaited by "an idyllic place, a hectare of happiness, a place of tranquillity amid the moraine. It was our small, provisional paradise: a perfectly trimmed lawn ideal for our tents, a snowfield to the side which acted as a fridge, a crystal clear lake fed by a stream, two boulders which provided shade on rest days, both in the morning and in the afternoon..." And, what is more, this was all located directly opposite Vay Vay, that authentic sheet of rock, 1 km wide, 600 meters high and even with glacier at its base. Marvelous!

What remained was figuring out where to climb. Rolando, Nicola and Luca had no doubts whatsoever and they chose the left-hand side of this great rock amphitheatre where, as it happens, the rock was most compact. The only route up the face lay on the right-hand side, established in 1984 by the pioneers Maurizio Perotti and Olindo Ceschia, from Italy's Friuli region. And so the adventure began on the face proper. A relatively sort start led to the "problem": pitch 3. A pitch which is worth retracing, also because it might help in understanding what makes this special team tick, where power is multiplied by three.

"We stood below the route's main incognita" said Larcher "a smooth yellow overhang, marked by a beautiful thin black streak. The yellow section was unclimbable, the black maybe. It was Nicola's turn and he set off determined, fighting hard past difficult moves and severe obligatory sections. As I belayed him I really hoped he'd succeed, were he to fail we'd have been forced to change our route line completely. At a certain point he stopped making progress, perhaps a hold was missing or perhaps, after two hours, it was better to swing leads and give him a rest?

It was now Gippo's turn (Luca Giupponi, Editor's note), he took the lead and tried to reach a belay. He placed a peg and continued straight up, attempting a boulder move to reach an arête where he sensed a ledge. Each dyno resulted in some ground gained but the result was always the same, a fall which got longer and longer. After yet another "dive" Luca asked to be substituted and so the third and final team member set off, laden with responsibility. I reached the final peg but instead of attempting to resolve the boulder crux directly I checked out the rock to the left, sensing some holds which perhaps provided some hope. I set off determined and thanks to decent holds and a slight change in angle I managed to climb past this final obstacle and get established on the hope-for ledge. We'd unlocked the door to the summit, more difficulties lay in store, but we now had various alternatives to chose from. In the end though this proved the crux pitch, certainly most demanding, aesthetic and beautiful to climb. And the fact that we had joined forces certainly gives it additional value."

So the three continued, alternating days on the rock face with time spent lounging and basking around (pardon, resting) at base camp, with the odd "mountain storm" thrown in here and there, those which make your heart skip a beat. And to think that one of the advantages of the Aladaglar is its stable weather... Even if, as Larcher explained, this holds true "for the other side of the mountain... because our faces had some pretty good storms, which were frightening to say the least!" As things turned out though, summit day arrived with perfect, stable weather. The three reached the top of the shoulder and continued up the crest to reach the pre-summit. From here they scrambled down a gully and up grade IV terrain for 100m to reach the summit proper. And there, at 3563m, the time finally came to "fill our eyes with all this depth."

The next step, as if following a manuscript, was the dutiful redpoint. "I was curious to try the crux pitch, I only knew its finale" Larcher recounted. "We alternated giving it a go, like a pleasant day at the crag, thanks to the good ledge at the belay, We all wanted to climb it free and, after checking out the moves, first Gippo then Nic managed to send it. When my turn came we were struck by yet another storm, in the blink of an eye everything was soaked and my attempt ground to a halt. The next day we were back again, things ran smoothly and we managed to free the whole route. It was really exciting!" A technical note: as usual, bolts were used vary sparingly. Also because "thanks to using trad gear the batteries of our drill lasted all the way to the top..."

After the successful ascent they took down their tents and transported everything back down the valley, leaving their base camp exactly as they had found it. The new route needed a name. A task which had an obvious answer: "During all those 15 days spent at our camp site, we never met nor saw a single "Sapiens", a truly rare privilege in these crowded times. And that's why we decided to call it like Odysseus was called by Polyphemus: Outis, Nobody."

Then, after returning to the Marti campsite, after having repeated the beautiful rock climb Orient, established by Helmut Garghitter up Parmakkaya, Rolando, Nicola and Luca decided to finish their holiday in style by establishing a new route. They chose a line up the right-hand side of the beautiful, narrow Cimbar Valley canyon, 200m high, steep, in the shade, up excellent rock and with an easy approach. The route was climbed in a couple of days "the great thing about having three capable first ascentionists, is the speed with which things get done" explained Larcher. And so "at the end of the first day we had already established the first four pitches. On our second day - our final day there - we freed up to our highpoint (all three of us led the pitch 3, a splendid overhanging red corner) and then we continued towards the summit up a pillar with a final, fifth pitch.
For this successful expedition there could be no better conclusion. We named this route "Radio Eksen", a radio which transmits great music from Istanbul, without any ads, always on at Recep's house and which basically became our soundtrack." And this too speaks volumes about the story and everything which accompanies it.