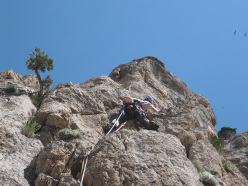 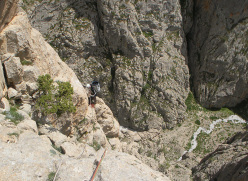 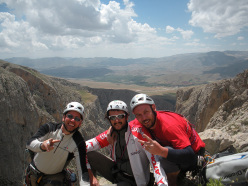 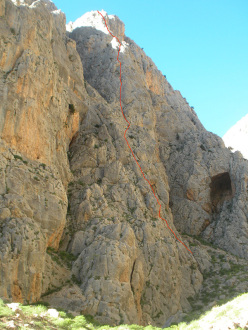 In June 2013 the Italians Jimmy Palermo, Tommaso Salvadori and Ivan Testori made the first ascent of Cani Randagi (300m, 6b max, 6a obl) in the Cimbar Valley, Aladaglar, Turkey. The route is dedicated to the late Don Andrea Gallo and Franca Rame, and the protests in Taksim square.

300m high and graded a mere 6b, Cani Randagi in the Cimbar Valley will never become a symbol or an emblem of rock climbing in Turkey. But this was our first new route away from home and for us it represents a dream come true, a project which came to life after having managed to steal from precious time, from our society's perverse consumerism. Our route was established in a land where form and people still have ancestral belongings, and are therefore alive. And true.

You don't decide to make some journeys, they choose you.
Certain lands feel far off, but then you learn to lock them in your heart
Some days remain anonymous, others survive beyond time.
Other seasons come, while some seasons go.
Perhaps it was due to that last storm.
Certainly the most intense one.
We cast the seeds into the wind.

Thanks to Gruppo Scoiattoli dei Denti della Vecchia, Exped, Mammut by Balmelli a Lugano, Cai di Sesto Calende and Cinghiut for their suppor, Matteo Bernasconi and Davide Spini for having lent us their stashed ropes and Recep at Aladaglar Camping for his kind hospitality.