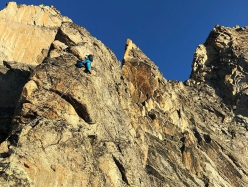 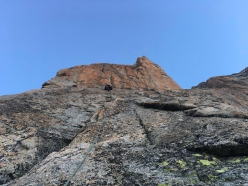 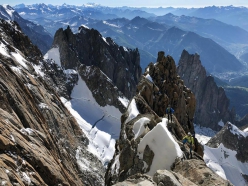 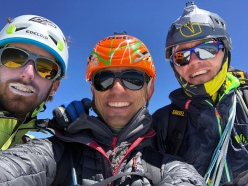 Denis Trento reports about a fast ascent of Aiguille Noire de Peuterey carried out by Marco Farina and Gabriele Carrara combined, the next day with Trento himself, with the Via Bonatti - Oggioni up the Pilier Rouge du Brouillard and the summit of Mont Blanc.

After a frosty tail end to spring, the heat suddenly arrived and did so in style. Temperatures close to 40 degrees down in the valley and huge amounts of snow still up in the mountains made mixed climbing at altitude extremely complicated.

Alpinists of 2020 must be poised to interpret the new signals that arrive due to global warming and above all must know how to reinvent themselves if they wish to continue climbing mountains.

Situations like these can also give rise to interesting new undertakings, such as the link-up of Aiguille Noire from south to north with an ascent to the summit of Mont Blanc via Pilier Rouge du Brouillard and the classic Brouillard Ridge

This sort of S-shaped “integral” combines two of the most beautiful climbs in the Freney and Brouillard basins, and has the advantage of crossing predominantly rocky terrain and therefore being relatively safe when conditions are hot.

Furthermore, unlike the integral ascents of the ridges above these two basins, this combination boasts an exceptional stopping point, namely the Monzino hut.

Last weekend Marco Farina, mountain guide and an experienced member of the Italian military mountain corps, teamed up with Gabriele Carrara, a promising alpinist about to finish off his mountain guide. The two climbed Aiguille Noire, setting off from the La Sorgente campsite down in Val Veny, in the amazing 7 hours and 15 minutes. They then descended via the north face and reached the Monzino refuge before the kitchen closed, just in time for a hearty bowl of pasta prepared by Mauro, the chef and hut warden.

On the second day the alarm clock rang early as usual for both of them, while I didn’t even need to set it as I’d already started up to reach them at midnight. After a quick breakfast, at half past two our trio was already venturing upwards towards the striking Red Pillar of Brouillard.

Being a group of three made the actual climbing a little less fluid, but once we kicked into action we negotiated the difficulties in 4 hours. We were still distant from the true summit of Mont Blanc, and were climbing precisely 60 years after the first ascent carried out by Walter Bonatti and Andrea Oggioni with one bivouac from 5 to 6 July 1959.

Although this wasn’t the first time I was up in that area, it always amazes me how in just a few meters you can go from the most beautiful granite in the Mont Blanc massif to the worst rock imaginable.

600 meters of choss later we found ourselves shaking hands on top of the highest mountain in the Alps.

As usual, once the adrenaline that fuels the ascent gives way, the descent via the Italian normal route becomes a mental battle against fatigue, sleep and boredom. However, we all knew that the 3300 meters that separated us from our car sooner or later were destined to become zero.

For me personally, tying in with good friends (and above all talented mountaineers) to complete an important ascent was a way to savour sensations I’d somehow lost for a while, seeing that in recent years my time in the mountains was spent ski mountaineering or doing things extremely fast and light.

For Marco, this combination was another step towards his goal this season, namely an expedition to Nemjung, a 7000m peak in Nepal where he and Marco Majori he attempt to establish a new route.

For Gabriele, on the other hand, this two-day outing was nothing more than a pleasant warm up, seeing that the next day he was attending the mountain guides alpine training module.

30.05.2019
Denis Trento and his exceptional spring ski mountaineering in Valle d'Aosta
Anomalous spring conditions across the Alps were exploited to the max by Denis Trento who managed to ski almost every day up in the Valle d’Aosta mountains. While “seeking the best conditions rather than famous descents”, Trento’s mountaineering always starts directly from the valley floor, is fast & light and at times resorts to using a bike to reduce the approach times.