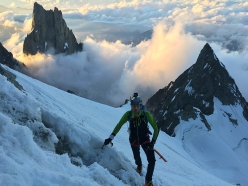 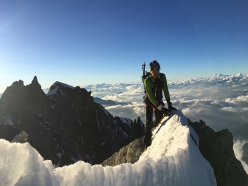 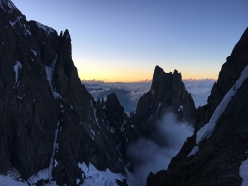 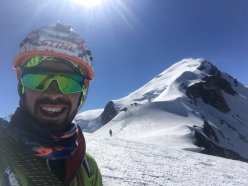 Denis Trento reports about his fast ascent of the Innominata Ridge, carried out with Robert Antonioli in just 6 hours and 10 minutes. Although undoubtedly a fast ascent, the climb is interesting above all because, climbing as a roped team, they ascended with an increased safety margin

Two days ago Denis Trento and Robert Antonioli made a rapid ascent of the huge Innominata Ridge, starting from and returning to the La Sorgente campsite in Val Veny on the Italian side of the mountain and climbing to the summit of Mont Blanc in 6 hours and 10 minutes. The two then spent 3 hours and 50 minutes descending via the Gonnella Refuge, past the the Miage glacier and Val Veny. The ascent time is not a record in absolute terms - in this regard it’s worth remembing the fast ascents carried out by Ueli Steck in 2016 and Kilian Jornet Burgada in 2012 - but the recent climb is interesting and important because, climbing as a roped-team, they ascended with an increased safety margin. Here is the report and point of view of Italian mountain guide Denis Trento.

Speed in the mountains is, by definition, inversely proportional to two factors: weight and safety. There is though a direct correlation with physical fitness and the mountain conditions.

While considering precisely there last two factors I decided to suggest to Robert Antonioli, currently one of the world’s strongest ski mountaineers, to dart up Mont Blanc.

The immediate idea was to climb the Innominata Ridge. The reasons for this are diverse: first of all because of the beauty of the climb, secondly because it’s a direct line and, last but not least, because this route served as some form of comparison for two of the world’s reference points for modern fast alpinism, Ueli Steck and Kilian Jornet. Since we are both less talented, and moreover since we’re both fathers, we couldn't in any way compromise our climbing safety. We improvised our plan in just half a day and this contributed significantly to the weight of our gear.

So we set off at 3 am from Camping La Sorgente (for all mountaineers this is campsite run by Matteo Pellin), with more or less the same gear we would have taken had I done this climb with a client. Robert was perhaps slightly worse off than myself, having some mountaineering boots that were at least 6-7 years old and other gear that would have been better off in some Italian Alpine Club museum.

In any case, we didn't feel our 8 plus kilos of gear (a rather conservative estimate) until the Monzino hut (1 hour and 5 minutes) where Mauro, instead of a breakfast had prepared what resembled a wedding dinner. And the gear didn’t weigh us down, at least not Robert, up to the Eccles col (3 hours). During these first 2500 meters our ascent time was pretty much in line with that of our illustrious predecessors.

From then on the gap that slowly began to grow depended not so much on the weight of our gear but on the fact that we roped up. Since we tied in together, either we’d protect the climbing, or simply resign ourselves to the fact that a possible fall could only mean sharing the same funeral.

Despite the time involved in making the rope manoeuvres, in 6 hours and 10 minutes we hit against the icy gusts of wind that raced across the summit of Mont Blanc. For half an hour we were happy to have hauled almost the entire catalogue of Karpos jackets up to the top.

We were also happy with the ascent time and it left me thinking that with slightly lighter gear (3-4 kg were only dependent on the equipment) and by climbing slightly more efficiently (this was the first time that we climbed together) there’s huge room for improvement.

Havinf said that, trying to compare descent times with those of Kilian Jornet are pure folly for practically all bipeds on this planet, and even an ibex not on top form would have problems descending from the summit to Chamonix, passing vie the Goûter hut, in less than two hours. It is no coincidence that Ueli Steck wisely opted for a different descent, returning calmly to Val Veny, passing through Trois Monts and then Rifugio Torino.

If we also wanted to "customize" our climb, then there was nothing left to do but descend down the Gonella side of the mountain. Not being strapped to our beloved skis, the descent proved less enthusiastic, but after couple of Coca-Colas, and after having abandoned some gear at the Gonnella hut and then Cabane du Combal, we returned to the starting point in just under 10 hours.

"Records" aside, the real satisfaction comes from having been able to safely manage a climb and style of ascent that usually tends to sacrifice this factor. Even if my legs were far, far more tired than expected…

20.09.2012
Kilian Jornet Burgada, Innominata Ridge and Mont Blanc in 6 hours 17 minutes
On 18 September Spanish ski mountaineer and sky runner Kilian Jornet Burgada ascended from Courmayeur to the summit of Mont Blanc via the famous Innominata Ridge (1000m, D+, V+, 60º) in 6 hours and 17 minutes. The Spaniard then raced down to Chamonix in a total time of 8 hours 42 minutes.