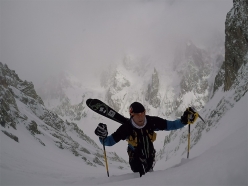 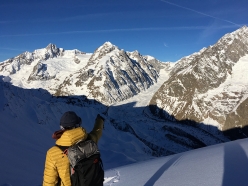 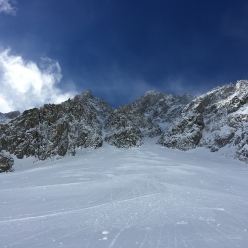 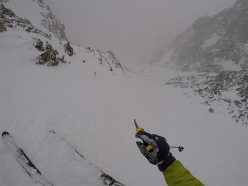 In the Miage area of the Mont Blanc massif, Denis Trento has linked two legendary couloirs on Petit Mont Blanc: Bonatti and Aigle.

Denis Trento is up to his old tricks. The mountain guide, with a vastly impressive background as a ski mountaineering athlete, has climbed and skied two descents in a single day, or rather two legendary couloirs in the Mont Blanc massif: Bonatti and Aigle on Petit Mont Blanc. These are the two main gullies above the Miage basin, known mainly for the never-ending approach to the Gonnella refuge when ascending the Normal Italian route up Mont Blanc. "That exhausting moraine" Trento told planetmountain.com “transforms in winter into a secret garden for those who love skiing steep slopes in a huge ambient, large scale, for those who don’t mind putting in that extra effort (or who can afford a helicopter…)” The twin couloirs are both located on the NE Face of a col on Petit Mont Blanc and both 1000 meters, with max steepness tipping in at 50 degrees. Graded AD II, they were first skied by Heini Holzer and Stefano De Benedetti respectively, and as per usual Trento linked them starting and returning to the car "by fair means".

There are some days (some winters even?) during which one just wants to ski a couple of curves. With a little common sense, this should be resolved by queuing up at a lift, or by skinning up in search of some tracks already made by others.

First of all, the fact that one has to earn the descent should help you remember what you’ve done, all that effort should be deeply engrained. And of course, if you ski where there are no tracks before you, that’s another good reason to remember the descent.

Where I choose to ski plays a role in my system of remembering things, sunny hillocks tend to be forgotten quickly and they make room for more intriguing situations. Being fully aware of all this inevitably leads to the most idiotic projects, such as setting off from the car to ski the Bonatti and Aigle, the two mythical couloirs on Petit Mont Blanc in the Miage basin.

The vertical gain is well more than 3000 meters, of which two thirds wading through knee-deep snow, but also the 44 km length is something I won’t forget in a hurry. And the ambient is awesome too, a thousand meters long both of them, and both as steep as one would want them to be.

In truth, on the Aigle couloir at some point I saw some tracks that my friend Davide Capozzi had shred a few days before. But the tons of snow swept by the wind that day restored conditions to virgin powder, giving the entire undertaking the sense it needed.

And to be truly honest, my memory works well regardless of all of the above. The few curves in question, on balance, were the usual pretext to go out in search of commitment, solitude, fatigue and psychophysical stress.

The underlying reasons for all of this are far more complicated to explain than the simple desire to ski a couple of curves.