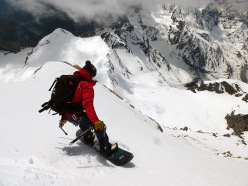 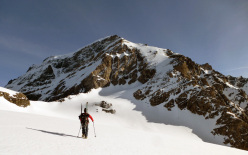 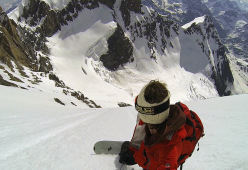 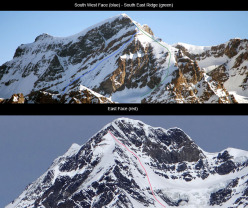 As so often happens, it all began with a photo. Year ago my friend Diego Fiorito (a highly experienced skier and mountaineer with numerous first descents to his name) showed me a photo of the East Face of Grand Combin de Grafenière (4314m.) and I immediately realised that it wouldn’t be simple. Accessing the face is difficult due to the tormented Glacier du Croissant that guards the flank, the approach is long and since checking conditions is difficult, the whole thing seemed like a rather daunting enterprise. I decided to scrap the idea of ​​skiing this mountain and opted for other goals that were easier to achieve.

This year, however, conditions haven’t been too great in the Mont Blanc massif and as a result my friends and I have often been on the lookout for other things to do. Skiing the East Face of Grand Combin suddenly came back to mind, thanks once again to a photo, taken by another keen skier and friend of mine. Conditions seemed excellent, all that remained was understand how to reach the face.

I showed the photo to Julien "Pica" Herry and he was clearly interested. We decided to reccie the Glacier du Mont Durand area at the foot of the Gr. Combin to work out what to do. During this exploration, of an area that neither I nor Julien knew before, we realized that the Grand Combin de Grafenière also had two other striking lines: the South East ridge (the Italian route) and the South West Face (skied for the first time, as it happens, on 18 May 2015 by Edmond Joyeusaz). At this point we decided we’d try and ski both lines and hope to also make our other little dream come true, namely to snowboard down the East Face.

At 4:30 am on 31 May Julien and I set off from the By valley, above the village of Ollomont, at 2100m above sea level; in 6 hours we reached the shoulder below the summit of Grand Combin de Grafenière, at 4200m. Conditions were great and we rapidly snowboarded down the 600m crest. We strapped on our crampons again and followed our trail to reach the shoulder for a second time. Fatigue began to set in but after hesitating for few moments we then launched down the immense SW Face; the spring snow was perfect and in no time at all we skied past the Bergschrund. All we had to do now was reach Col Sonadon and then descend to the Amianthe winter refuge. We’d had a long day out in the mountains and our splitboards began to weigh us down.

The following day we decided we’d try to reach the East Face via the SE ridge, traversing up high and ascending only the final section of the slope. Fortunately we were joined by our friend Denis Trento (a champion ski mountaineer) with whom we’ve shared many beautiful descents this year. Denis reached us that evening at the Amianthe hut.

The night was very short (the second for Julien and myself), the alarm clock rang at midnight and we set off at 01:00 am. At about 5:00 we reached the summit shoulder of Grand Combin de Grafenière once again; we entered the East Face at the crack of dawn on skis and snowboards, on marble-like snow. We strapped on our crampons and climbed up the final section of the East Face. Unfortunately there wasn’t enough snow in the narrowest section and we were forced to make a rappel, as a result we decided that the integral descent from the summit would have to wait for another occasion. We made do with skiing the Ease Face from the summit shoulder.

After having waited for over an hour for the snow to soften we finally stepped into our snowboards and skis and dove into the void. The snow was good and the 600m descent passed by quickly, the slopes were far more sustained than on the two routes the previous day, the drop was ever-present making it much more interesting.

On reaching the end of the descent we quickly crossed below and the enormous seracs that dominate Glacier du Croissant and retuned to Tour de Boussine (3826 m.); from this summit we descended towards Glacier du Durand and finally reached the Amianthe hut

A special thanks goes to my partner Michèle which lightened the weight of our backpacks on the first day, transporting the rest of the gear and food we needed for the following day.