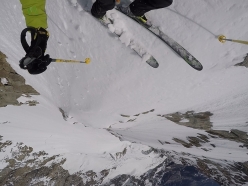 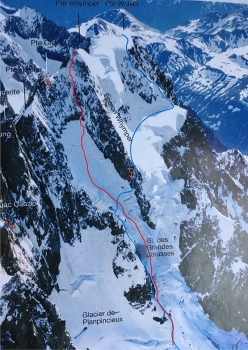 At the end of March 2017 Denis Trento made what might well be the first integral ski descent of the SW Couloir of Pointe Whymper. The video and report of the Italian mountain guide and extreme skier about this ski descent which, in particular the final 400m, has probably never been skied before. Records aside, this is certainly a great and beautiful adventure in the Mont Blanc massif.

Setting off at eight thirty from Val Ferret with less than half a litre of water, an energy gel and the aim of climbing the Morasses in a day is something which not even the dumbest mountaineer can think of. Despite often belonging to this category of climbers, not even I came up with such a ridiculous idea though.

Yet while I stowed the last things in my rucksack to climb up to Rifugio Boccalatte, the fact that I opted for a thin 30m cordelette probably meant that in the remote back of my mind I’d conjured up the thought of ascending all the way to the summit. Two hours later, as I put on my harness to enter the glacier, I‘d evidently accepted the idea of continuing up, or at least climb as high as I could before an obstacle blocked my path meaning that I wouldn’t be able to ski on down.

One hour later, while exiting the gully between Reposoir and Rocher Whymper, I noticed a narrow passage that led to thin couloir which seemed to continue directly to the summit of Pointe Whymper. I resigned to the fact that, at this point, the only option was to keep on climbing.

The passage was there, but it was a narrow, icy 10m section, impossible to ski down. Who cares I thought, I’ll just have to put my crampons on at this section when I descend. The rest of the couloir, despite its hard packed and at times crusty snow, didn’t seem impossible.

The last part of the ascent got to me, I was dehydration and sugar reserves were down, but but 4 hours and 15 minutes after my late start I reached the second peak of my cherished Jorasses. When I’d reached this point in autumn I’d been relieved, because at the time I felt that I’d dealt with the most dangerous part. This time I knew it was the exact opposite.

350m of ugly curves on hard snow took me down to the Bergschrund, from there the return to valley transformed into a pleasant ski on excellent spring snow. Unfortunately I was dehydrated that I failed to fully enjoy the scenery, but you can’t have everything in life…

The 10 minute plod to reach Planpincieux seemed to me like a traverse across the Sahara desert, but the thought of reaching the water fountain kept me marching rapidly onwards.

A few laters of water and a dish of pasta later, I began to think about the Jorasses and the fact that they’re not skied often, and that perhaps mine was a first ski descent.

As I asked friends and colleagues, sent emails to specialist websites and searched the internet, this hypothesis began to take shape. But since those born after the ’80’s can claim little in almost all sectors of live, one can only talk about “probable first descent”.