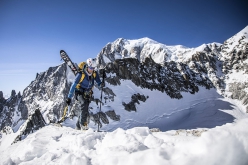 Anomalous spring conditions across the Alps were exploited to the max by Denis Trento who managed to ski almost every day up in the Valle d’Aosta mountains. While “seeking the best conditions rather than famous descents”, Trento’s mountaineering always starts directly from the valley floor, is fast & light and at times resorts to using a bike to reduce the approach times.

Nature reawakens in spring, animals come out of hibernation, flowers begin to blossom. And approaches become eternal, ascent times become absurd and the outcome of a given descent is always very much in the balance.

Ever since the climate has gone mad, prime winter conditions seems to form just when summer should be at the doorstep. There’s no point asking too many questions or complaining about the cold, the only really good thing to do is set the alarm clock even earlier, strap on your climbing skins and set off in the middle of the night.

Seeing that the duration of these foolish winters is normally very limited, all you can do is exploit conditions as much as possible. The time to sit back and rest will come far too soon anyway.

Having said that, this year it’s taken much longer normal for temperatures to rise and this has disrupted the biological mechanisms of more than one animal species, including mine. For more than a month I’ve woken up in the middle of night and have watched the sun rise from an altitude above 2000 meters.

During this extra time, quantity has only been a consequence of quality. Once I’d located the positon, altitude and aspect of where the best snow was shrewdly hiding, the trips turned out to be fast sieges during which every now and then conditions gave me slap in the face.

The style I adopted is the one I’ve imposed on myself, or rather, which life has always imposed on me, i.e. setting off from the valley floor ideally on skis, or on foot, sometimes even resorting to a bike. Which means that the necessary cruising speed, bearing in mind the vertical height gains and the fact that I almost always had to break a trail, had to be fairly fast, otherwise the days out would transform into nights out.

The fact that I almost always skied on my own was, in part, a consequence of all of the above. There aren’t that many skiers who can climb certain slopes at certain speeds. Even though my friend Davide Capozzi, despite his splitboard, certainly doesn't hang about when we actually manage to team up.

I don’t want to make an in-depth analysis of other factors, including safety obviously, since this topic would deserve a separate article. All I want to say is that every decision was made carefully and after such deliberation. I could write an encyclopedia about all the times I’ve bailed in the mountains in recent years.

It’s difficult to pick out some highlights of the last few months, but if I sit down and think hard, then some descents do actually stand out more than others. These include the three days in Valnontey during which I skied Gemelli with Davide Capozzi and followed this up with Testa di Valnontey and Grivola East Face. The latter was perhaps the one descent that left its biggest mark, both in my mind and legs, given the 2800m altitude difference that separates the valley floor from the summit ridge, climbed in about four hours.

The North Face of Aiguille d’Argentière, skied after having set off from ​​Argentière, is certainly one of my most beautiful and tiring memories. Once again this deals with something like a 3k vertical height gain and an ascent in about 4 hours.

Having forgotten to switch off the alarm at 5 o'clock abruptly interrupted the well-deserved rest I certainly needed the next day. But it did mean that, still sleepy, I started skinning up towards Tersiva. The conditions I encountered during the descent were perhaps the real bonus of the entire season. Deep down, in an ideal world, it’s only just that you’re rewarded for your efforts!

For the futile statistics, here is the almost complete list of the 31000m height gain from 20 April to 27 May. Fortunately in mid-May I went on holiday with my family for a week ;-)