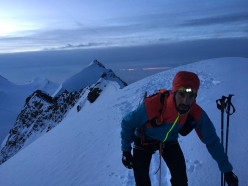 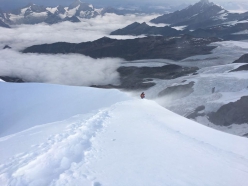 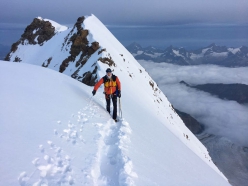 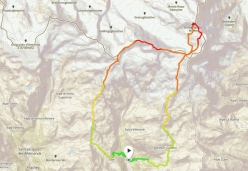 Denis Trento talks about his fast raid in the Monte Rosa massif together with Robert Antonioli across the peaks Lyskamm, Colle del Lys, Punta Dufour and Punta Zumstein.

To err is human, to persist in error is diabolical... Combining a mountain tour every time the Italian military ski mountaineering team meets up is becoming a habit which Robert and I are finding hard to do without.

Despite being based in Courmayeur and finding it difficult to whisk away from Mont Blanc, this time the weather conditions made us opt for Monte Rosa.

It would be nice to say that at every time we set off our tactics are refined and that our backpacks become even lightener, but this time it’s only true because during our last run up the Innominata Ridge we were packed to the brim! Actually, this time we are less light than expected. Which keeps me wondering what Steve House had in his 3 kg rucksack on K7 while he forged a new route that required several bivouacs at extreme altitudes.

Although we’re ready to launch at 2 am from the valley floor, it’s obvious that the kilos on our backs aren’t detrimental to our motivation.

Darkness does its fair share of hiding from view, and therefore from our brains, the lay of the land and what we’ve planned for the day, even if I unfortunately I’m acutely aware of what lies in store. What scares me isn’t so much the huge length of our trip, but the nigh complete lack of technical difficulties true, which are the only way I manage to make our partnership somewhat equal. In any case, I’d already accepted my destiny and so, after having panted across the entire Lyskamm, I willingly engaged in the second round on the Rey Ridge at Punta Dufour.

After more than 7 hours of fatigue the prospect of hours of descent wasn't tempting, but nevertheless we confidently strode down to lower altitudes where there’d be sufficient oxygen again to at least give us the illusion that we were strong again The magic of reoxygenating your body tissues and your brain fortunately repeats itself, although once again some neurons remain in the mountains as we deliberately decide to walk all the way back to the starting point.

The masochism ends after a 36 km journey and 3850 vertical height gain in 11 hours and 40 minutes back at the Staffal car park. Which for Robert, as usual, is only an stepping stone on his long journey back home to Valfurva…