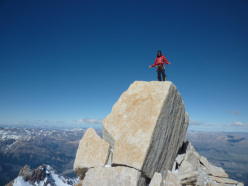 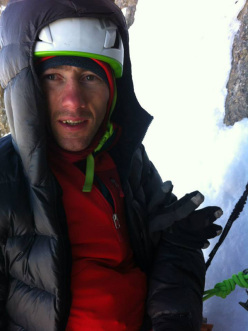 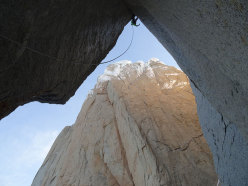 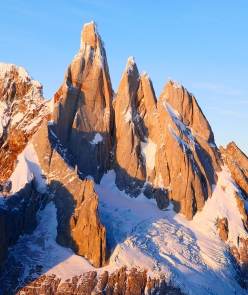 Corrado 'Korra' Pesce, the Italian mountain guide known as one of the strongest climbers of his generation, lost his life on Cerro Torre in Patagonia.

In addition to his undeniable skill as an alpinist, Corrado "Korra" Pesce was one of the most sincere, pure and humble mountaineers of all. He didn't just complete huge climbs without making any fuss whatsoever, he was also happy for and motived by the successes of others. It is for this reason that he was loved and respected by everyone. This is why his death has hit the climbing community so hard. That discharge of rock and ice that struck him on Cerro Torre seems to have taken everything away: his life, his immense love for mountaineering, the joy for the new route he’d just established with his close friend Tomás Aguiló. All of this has been swept away in an instant. All, except for our memory of Korra. Our recollection of the man and the mountaineer he was.

Born in Novara, Italy, in 1981, Korra moved to Chamonix in 2004 to pursue his love for the mountains, which grew while working at the mountain huts Capanna Margherita and Rifugio. Expert at climbing ice and mixed routes, he soon made a name for himself for his uncompromising climbs, initially in the Mont Blanc massif, then across the Alps, in Patagonia and in the Himalayas. He was known as being the expert of the North Face of the Grandes Jorasses, where he completed dozens of ascents such as - to cite just one example - his solo of the Polish route in 2014. Grandes Jorasses aside, Korra was undoubtedly one of the most active alpinists on the mountains above Chamonix. Stand out ascents include Full Love on the North Face of Peigne with Julien Desecures, Jon Griffith and Jeff Mercier in 2012 and his repeat of Die Hard on the North Face of Pélérins with Mercier that same year. During a quick raid to the Italian Dolomites in 2013 - remarkably, his first-ever visit to the Pale Mountains - he lost no time in climbing the ephemeral sliver on the immense west face of Sass Pordoi, establishing Ghost Dog with habitual climbing partner Jeff Mercier. In 2014 he teamed up with Martin Elias again to make a rare repeat of the demanding Directe de l’Amitié on Pointe Whymper of the Grandes Jorasses, described by Korra in no uncertain terms as "the most challenging route up the Jorasses and the line that satisfied me the most." In 2016 he took his talent to the 6454 m giant Bhagirathi III in the Indian Himalaya where, with Damien Tomasi, Martin Elias and Sebastien Corret he repeated Estrella Impossible. In 2020 he climbed the vanishing line of Amore Supercombo on Pizzo Badile with Andrea Di Donato and Michael Wohlleben, while in 2021 he repeated the South West Pillar of the Petit Dru, climbing Voie des Papas combined with what is left of the famous Bonatti Pillar. This was an important moment for Korra as he climbed, in his own words, in the footsteps of "great Walter".

Mont Blanc was where Korra had chosen to settle down with his family, but by his own admission Patagonia was his second home. In 2011 Korra made his stylish debut in those inhospitable mountains at the end of the world, climbing Cerro Torre via the famous West Face Ragni Route with Michael Lerjen-Demjen, before completing the traverse from Aguja Standhardt to Punta Herron a few days later. Evidently he ate some of the famous calafate berries because, as per tradition, he soon returned to Patagonia, in 2013 to climb Aguja Mermoz and Torre Egger with Manu Cordova, before joining forces with Andrea Di Donato and summiting Fitz Roy the via classic Supercanaleta. In 2014 with Pierre Labbre and Damien Tomasi he climbed Aguja Poincenot via the Whillans Cochrane, then Fitz Roy once again, this time via Mate Porro before finishing up the line chosen by Renato Casarotto during his 1979 solo.

Korra’s masterpiece came two years later, when he pulled off the first repeat of Psycho Vertical on the southeast face of Torre Egger, carried out from 7 to 9 January 2016 together with Tomás Aguiló, Roland Striemitzer, Iñaki Coussirat and Carlitos Molina; the route had waited almost three decades before being reacted and Korra described this experience as "maybe the toughest route I have ever climbed." And now, just hours before his fatal accident, Korra managed to forge a new route up the north face of Cerro Torre with his trusted climbing partner Tomás Aguiló. As yet there are no details of this ascent, for obvious reasons, but there can be no doubt that this is an absolute masterpiece. A route that will forever stand testament to Korra’s immense skill and vision.

The mountains above El Chalten proved an irresistable draw for Korra. "This really is a special place for me" the 41-year-old Italian had once said. "It's difficult to climb in Patagonia because the weather is hardly ever favourable" he explained. But nevertheless he returned whenever he could, simply because, for him, those countless granite towers above the Hielo Continental glacier provided precisely what he was looking for, "an incredible experience."


CROWDFUNDING
Friends have launched a crowdfunding campaign for Leia, Corrado Pesce's 13-year-old daugher. For anyone wishing to contribute, here's the link: www.leetchi.com/c/help-to-korras-pesce-daugther

30.01.2022
Corrado Korra Pesce perishes on Cerro Torre / The climb, accident and rescue attempt. By Matteo Della Bordella
The El Chalten mountain rescue has announced that there is no longer any hope of finding Corrado 'Korra' Pesce alive. The Italian mountain guide was hit by rock and ice high up on Cerro Torre along with his Argentine climbing partner Tomás Aguiló. Matteo Della Bordella (who with David Bacci and Matteo De Zaiacomo climbed another new route at the same time and who, together with his partners, shared the upper section of the route with Pesce and Aguiló) reports about the ascent, the accident, the rescue of Aguiló and the attempt to rescue Korra.

02.10.2014
Grandes Jorasses, Directe de l'Amitié by Corrado Pesce and Martin Elias
On 26 and 27 September 2014 Corrado Pesce and Martin Elias repeated Directe de l'Amitie on the North Face of the Grandes Jorasses (Mont Blanc). A route first climbed in winter 1974 by Louis Audoubert, Michel Feuillarade, Marc Galy and Yannick Seigneur, described by Corrado Korra Pesce as 'the most challenging route up the Jorasses and the line that satisfied me the most.' In this report Korra talks about his recent ascent and takes a step back in time to examine the history of this great route.

13.12.2011
Corrado 'Korra' Pesce, from No Siesta to Cerro Torre. The interview and meeting with Rolando Garibotti
From the North Face of the Grandes Jorasses to Patagonia. Corrado "Korra" Pesce's alpine journey, introduced by Rolando Garibotti in this meeting and interview - from one alpinist to another - in El Chalten