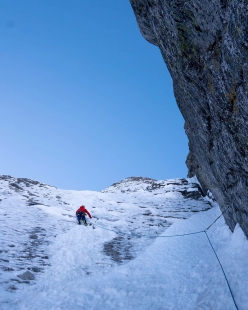 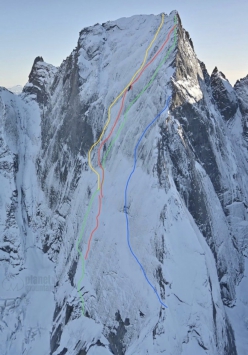 Circa 10 days ago conditions on the NE face of Pizzo Badile were absolutely perfect, inducing Matteo Della Bordella and Silvan Schüpbach to forge their Crossway of Friendship on the righthand side of the mountain. The next day the Swiss mountain guides Marcel Schenk e David Hefti ventured up the central section of the face where they completed a combination of two winter routes, Amore di Vetro established by Schenk insieme with Simon Gietl in 2016 and Nordest Supercombo, first ascended a month later by Schenk and Hefti.

The new variation is called Amore Supercombo and Schenk, writing to planetmountain.com, summed up the experience as follows: "This time conditions were unbelievable. We even managed to place some ice screws. Nevertheless, it remains a serious route."