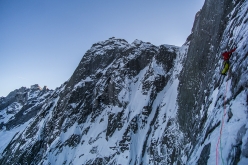 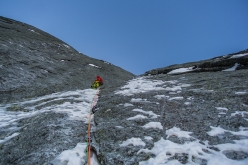 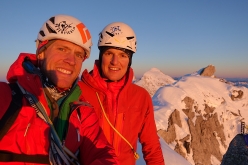 Marcel Schenk and David Hefti on the summit of Pizzo Badile on 16/12/2016 after having made the first ascent of Nordest supercombo (800m, M7, R)
Photo by Marcel Schenk, David Hefti 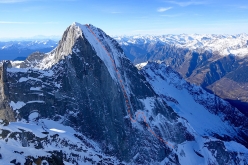 On 16/12/2016 the two Swiss mountain guides David Hefti and Marcel Schenk climbed the ice and mixed combination 'Nordest supercombo' (800m, M7, R) a demanding line that joins Via Cassin with via Memento Mori up the NE Face of Pizzo Badile.

Precisely a month after having made the first ascent of Amore di Vetro, the mixed climb that solved a long-standing winter problem up the NE Face of Pizzo Badile, Marcel Schenk returned to the scene of the crime together with David Hefti to climb what they describe as being one of the best mixed outings they have ever climbed.

After Amore di Vetro Schenk continued to keep an eye on the Badile face, also because of the general lack of snow in the Alps. After having seen from nearby Cengalo that the Badile NE Face was in condition, at 4:00am on 16 December the two mountain guides set off from the valley head in Val Bondasca. At the Sasc Furä hut they stopped off quickly to swap gym shoes for mountaineering boots, while on the shoulder at the start of the North Ridge route they retrieved the gear they had stashed three days previously. At first light they started up the snowy ledge, climbing leftwards to join the famous Cassin route, established in 1937 by Riccardo Cassin, Vittorio Ratti, Gino Esposito, Mario Molteni and Giuseppe Valsecchi.

Once again the slabs plastered in a thin layer of ice demanded delicate and dangerous climbing and the two proceeded by swinging leads. A month earlier Schenk had proceeded directly upwards at the first snowfield to forge Amore di Vetro, but this time the two continued along the Cassin route all the way to the second snowfield. At its lefthand edge they traversed leftwards to reach, at 11:00am, the central couloir of via Memento Mori, first climbed in August 1980 by the Czech alpinists Josef Rybicka, Jan Simon and Ladislav Skalda and defined by many as the "most hair-raising" on the entire face.

At this point the Swissmen realised they had entered the heart of the route and the crux of the new combination, as Schenk explains "The face was steeper than it looked from below and required total commitment. The view onto the Cengalo glacier was fantastico and we gained height with every swing of the ice axe. The pitches were demanding and the angle lessened only very slowly. From the snow slope we reached the upper section of the route, the spade-shaped part, after five long 60m pitches." These pitches provided difficulties up to M7, but with better pro compared to the thin sections below. The two simul-climbed the final 200m, with the rope starched out a fun 60m and gear placed between them for protection, and the summit was reached at last light at 16:30.

The descent was carried out in the dark: knowing from the Cengalo ascent that conditions on that side of the mountain were good, from the summit of Badile they traversed down to Punta Sertori, from where some abseils in the dark deposited them at Col da Cengalo. They descended the 600m couloir on foot, ascended the 150m back up to the North Ridge, and then made the long descent back to the car park at Laret. They reached this at 21:00, a mere 17 hours after having set off. Talking to planetmountain.com, Schenk stated "Badile in a day. Wow. And what a day! We knew conditions were good. And we simply wanted to get out and do a bit of mountaineering!"