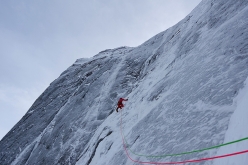 Simon Gietl on the upper section of the face during the first ascent of 'Amore di Vetro', Pizzo Badile on 16/11/2016
Photo by Marcel Schenk 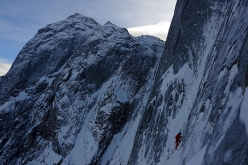 On the middle snowfield during the first ascent of 'Amore di Vetro', Pizzo Badile on 16/11/2016
Photo by Simon Gietl 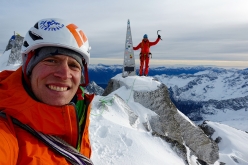 Marcel Schenk and Simon Gietl on the summit after the first ascent of 'Amore di Vetro', Pizzo Badile on 16/11/2016
Photo by Marcel Schenk, Simon Gietl 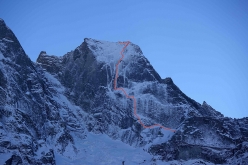 The cold season has begun with a remarkable ascent at the hands of Switzerland’s Marcel Schenk and South Tyrol’s Simon Gietl won on Wednesday 16 November forged a new winter climb up one of the six great north faces of the Alps, Pizzo Badile.

In the afternoon of 15 November the two mountain guides left the car park in Val Bondasca and headed to the Sasc Furä hut and then the shoulder where the North Ridge route begins. From here they examined the face and due to far from ideal snow conditions they decided to break a trail to the base of the route, so that they would be poised for the next day. After having crossed the upper section of the snowfield and stashed some gear at the shoulder they descended to the hut and spent the night there.

Early the next morning they set off and quickly reached the base of the route. Schenk recounts "Conditions seemed OK and we set off into the unknown via a sliver of ice, only a couple of centimeters thick. We immediately realized how series the undertaking was. Placing gear proved demanding and, at times, simply impossibly. But our team worked well and we made fast progress. After three hours we reached the snow field in the middle of the face, where the heart of the route lies. A beautifully wild drip of ice led us upwards rom here. The climbing continued to be demanding and our way into the unknown remained exciting. We protected the climbing with pegs, Peckers and nuts, our short ice screws were too long and we could hardly place our camming devices in the frozen cracks. We had to be careful as we climbed, as our ice axes often hit the hard granite, or our crampons broke through the thin ice onto the smooth slabs. "

Simul-climbing due to lack of pro resulted in pitches up to 100m long and at 15:00 they successfully reached the summit, before descending safely down the North Ridge. Schenk told planetmountain.com "The route crosses the summer Cassin route and Linea Bianca a couple of times, while on the upper section it runs to the right of Via Memento Mori. Let’s say that, in these conditions, our Amore di Vetro is a logical winter line. A modern way of interpreting alpinism."