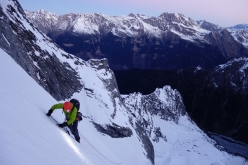 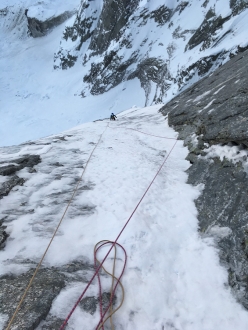 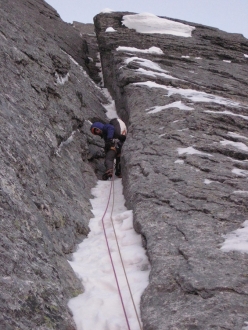 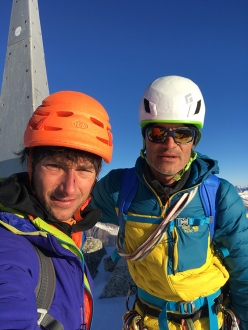 Luca Godenzi and Carlo Micheli on the summit of Pizzo Badile after having carried out a rare winter ascent of Via Cassin on 30-31/12/2016
Photo by Luca Godenzi, Carlo Micheli

Alpinism: Luca Godenzi reports about a rare winter ascent of the famous Cassin route on the NE Face of Badile, carried out from 30 to 31 December 2016 with Carlo Micheli.

By its standards, the base of Badile was crowded early in the morning on 30 December: a staggering two parties were gearing up to climb the mountain’s famous NE Face, considered one of the six great north faces of the Alps. One was comprised of Germany’s Ines Papert and Slovenia’s Luka Lindic who, as previously reported, nabbed the first repeat of Nordest Supercombo, the line that connects Via Cassin with Memento Mori. The other team was comprised of two mountaineers from nearby Poschiavo, Luca Godenzi and Carlo Micheli who that day opted to climb the entire Via Cassin, established in summer 1937 by Riccardo Cassin, Vittorio Ratti, Gino Esposito, Mario Molteni and Giuseppe Valsecchi. The recent Swiss ascent goes down as an extremely rare winter repeat, probably not even the tenth in the cold season after the first winter ascent was carried out in 1968 by an Italian-Swiss team that included Paolo Armando, Gianni Calcagno and Alessandro Gogna and Camille Bournissen, Michel Darbellay and Daniel Troillet. It was Papert who drew our attention to the noteworthy Swiss repeat, described as "a real journey into the world of dry tooling and modern mixed climbing, offering 5-star mountaineering, never predictable and never banal.” The duo reached the summit in the dark of night on 30 December, slept in the Redaelli bivouac, and then descended safely to Bagni del Masino via the normal route the next morning.

VIA CASSIN IN WINTER
by Luca Godenzi

We take advantage of the last light to tour to make a quick recce and stash some climbing gear at the base of the face, then we return to the fabulous winter room in the Sasc Furä hut, lost high up in wild Val Bondasca.

Later that evening we’re joined by the strong climbers Ines Papert and Luka Lindic. Their goal is Supercombo, an elegant combination of the Cassin route and Memento Mori that came about thanks to the great insight of local climbers Marcel Schenk and David Hefti. Two teams heading up the NE Face of Badile on exactly the same day in winter is certainly a somewhat unusual coincidence, especially since the route, first ascended in 1937, has less then 10 winter repeats in 80 years.

A rapid approach leads us to the col that accesses to the large ledge. We follow Luka along the long traverse and up the snowy ramps that plaster the Rebuffat Diedre. At the First Cassin Bivouac the actual climb begins. From here we see what lies ahead: a huge compact sheet of rock, featureless and difficult to protect, with only the occasional patch of ice.

Even more so than in summer, the logical nature of the route becomes blatantly evident in the cold season. It cleverly ascended the line of weakness in this granite desert and breaches the starting overhangs by ascending a series of corners and traverses. Various slabs then lead to the central snowfield and then a long series of chimneys that split the upper section of the face like a huge axe blow. This really is a magnificent line, the "King Line" up this iconic peak.

Long periods of foehn and high temperatures in late December deprived the face of sheet of ice that formed in autumn, restoring it to its original state. And without ice, there where the cracks and other features finish, the slabs impose their own laws. Climbing with utmost balance and precision becomes obligatory, it’s a game of monopoints on small crystals and moves that are always uncertain. It’s a terrain the modern mixed techniques need to be applied with a little "savoir faire”.

The pitches are both demanding and beautiful, the temperatures pleasant. An alpinism that dreams are made of, a true privilege! Our partnership is well-oiled and works perfectly, the confidence in each other transforms the demands of a route with no easy exit into a fun and exciting adventure. At the belays we even have time to relax and chat with Ines and Luka, two really nice people. They disappear off to the left at the central snowfield and rapidly ascent the stupendous strip of silver. We continue by dry tooling our way up grade VI pitches to reach the base of the chimneys. A short leftwards traverse gives me a hard time, I read the route wrongly and manage to make things difficult for myself on easy terrain, what a genius! A thin layer of ice finally allows us to accelerate and progress easily up the gully which had transformed into the most beautiful goulotte we've ever climbed. "If this were in Chamonix, with the cable car that lead you right to the base of the route, there’d be a queue...!"

Behind us the sky transforms cobalt blue before sinking into total darkness. Our world shrinks into just a few meters, illuminated by our headlamps. Apart from a few brief moments we share at the belays, the sense of isolation becomes totalising. We are nothing but two tiny dots of light, adrift in this sea of ​​ice and granite.

The latest, usually easy pitches are coated in a flimsy layer of snow and demand utmost concentration. A retreat from here is out of the question, finding a solution that leads us upwards is the only viable escape. We decide to follow the chimneys all the way, past long runouts, until we finally join the North Ridge.

From here we head towards the summit. 200m without which this winter ascent would not have the same flavour. From the summit we can see the lights twinkling in the valley below, it’s a breathtaking view we will never forget. Then we dive into the Redaelli Bivouac and we plunge into our dreams, engulfed in a feeling of happiness. The fact that you brought a stove without its gas cartridge fails to ruin our good mood and will be nothing but an amusing anecdote to remember from time to time.

The next morning the little tin box that hosted us during the night is struck by the extraordinary colors of dawn. After a calm and uneventful descent we toast our climb, finally, with a great beer.