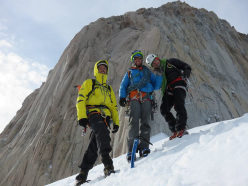 After Friday's brief summary about Italian ascents in Patagonia, here's a quick update about Italy's Corrado Korra Pesce who is currently in the region with two French friends Pierre Labbre and Damien Tomasi, with whom he made two quick raids in the mountains from their base in El Chalten.

The three began their season with a rapid ascent of Aguja Poincenot via the Whillans Cochrane route during a short break in the continuous spell of bad weather. After this they took advantage of the better forecast and ascended the north pillar of Fitz Roy; the trio climbed the Goretta pillar in a day via the Mate Porro route first climbed by Rolando Garibotti and Bean Bowers and after a cold bivouac they reached the summit of Fitz Roy via the Casarotto route, first climbed solo by Renato Casarotto in 1979. They descended quickly and returned to El Chalten the next morning. The combination is circa 1200m high with difficulties around 6b/6c and progress was hampered by the snow and ice that filled the cracks.

Trekking in Patagonia
Trekking in a magical and mysterious land: three magnificent walks around the Torres del Paine, Fitz Roy and Cerro Torre, the stone heart of Patagonia.