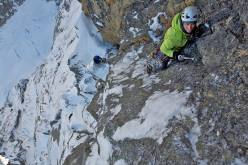 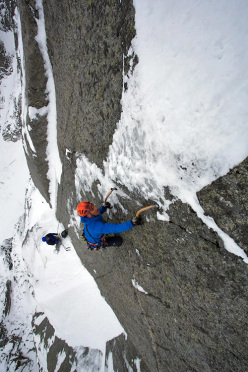 Jeff Mercier leading pitch 10 of Full Love... for dry and ice (V, 5+,M6 R, 500m): a super thin series of moves takes you to a full arm stretch to decent ice above and a sigh of relief
Photo by Jonathan Griffith 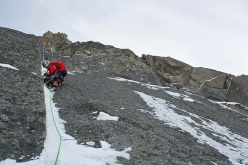 Full love... for dry and ice: Korra Corrado Pesce heads up for yet another 5 star icy corner with some spicy mixed moves at the top
Photo by Jonathan Griffith 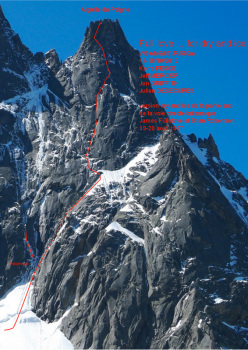 Last Wednesday and Thursday an extremely strong team of Chamonix-based alpinists comprised of France's Julien Desecures and Jeff Mercier, Italy's Corrado "Korra" Pesce and England's Jonathan Griffith made the perfectly-timed ascent of the beautiful and intense “Full love... for dry and ice” up the North Face of Aiguille du Peigne in the Mont Blanc massif.

This winter outing, described by Griffith as "simply awesome" follows the upper half of a very rarely – if ever - repeated British route established in summer 1967 by James Fullalove and Brian Robertson with the use of difficult aid and the 500m line now goes clean at a very impressive V, 5+, M6 R. Acting on a hunch by Julien Desecures, the mixed French, British and Italian team fixed the first two pitches last Wednesday and after a short night at Refuge du Plan they set off early the next morning, jumared up to their highpoint and continued upwards into the unknown.

Writing on his blog, Griffith stated "Above lay some of the most amazing climbing I have ever done in the range. Hundreds of meters of steep grey granite towered above; at the centre a key thin placage of ice that we were hoping would lead us somewhere...but we weren't sure where. The original line had a very poor description and as we weren't following splitter cracks we didn't even know if the line would go in winter. But every pitch would lead to another 5 star hidden pitch. Getting progressively harder and harder the line took us through wild thin ice and steep corners offering just enough protection and ice to inch ever closer to the top. No pitch the same but each surpassing the last in style and quality and general wow factor until the final sting in the tail reared its ugly head in the form of a runout and tenuous crux pitch to the summit proper."

After reaching the summit the four descend to the hut which they reached at 11.00 pm. The route is called "Full Love... for dry and ice" with obvious reference to the first ascentionists and while the line on the upper section is clear, the four are uncertain as to how much new or original British terrain was followed on the lower section.

Griffith explained to Planetmountain "The idea was to create a new winter line up on the British route. We are not 100% sure if we followed the original line because the topo is not very descriptive and we were following a winter line rather than summer. I think the main point though is that this was one of those super old aid routes from the 60's that since then has had no attention due to factors such as its A3 status. What we climbed is an incredibly cool line as it follows the line of the British route to a certain degree but manages to avoid things like the slab pitches by heading up steep corners to the side. The really interesting aspect of this route though it that it just keeps appearing: you head up this very open and slabby granite and can't believe that there will be any safe ice heading up there, but as you finish one thin corner off, traverse over to the side, suddenly there's another huge 50m corner with thin placage ice right above you! The route rarely comes into condition and two days after our ascent I went back up to try another new route nearby but the entry couloir had completely collapsed already. So it may not get a repeat for many many years to come..."

For the complete report and extensive photos check out www.alpineexposures.com