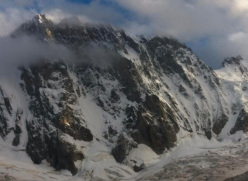 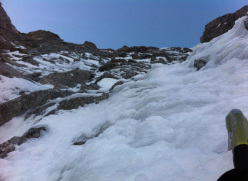 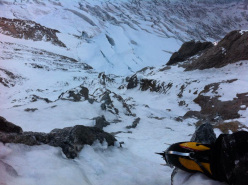 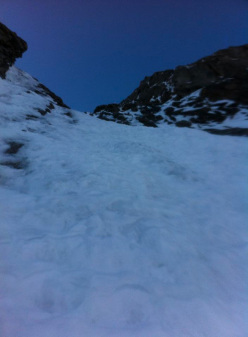 Corrado Pesce and his Polish route solo up Grandes Jorasses

On Monday 8 September the Italian alpinist Corrado "Korra" Pesce made a fast solo ascent of the Polish route up Pointe Helene on the North Face of the Grandes Jorasses (Mont Blanc).

Yesterday morning Corrado "Korra" Pesce repeated, on his own, the Polish route up the North Face of the Grandes Jorasses in the Mont Blanc massif. An 800m line which, as the Italian mountain guide explains in the interview below, is actually a winter combination of the two Polish routes that reach Pointe Helena: the 1970 route first climbed by Eugenius Chrobak, Jacek Poreba and Wojtek Wroz, and the one climbed five years later, in August 1975, by the Himalayan experts Wojciech Kurtyka and Jerzy Kukuczka together with Marek Lukaszewski. Korra climbed the combination, which is simply referred to as Voie Polonaise, in the lightening fast time of 2 hours and 10 minutes. His ascent is likely to be first solo ascent of the route.

What is interesting, when talking about the speed but above all the choice and the spirit with which he climbed, is what Corrado "Korra" Pesce told us. First of all, he states, at times too much attention is paid to the speed of a climb and, in particular, solo ascents of this sort. In reality, Korra explains, he tends to be quick even when climbing with a partner, it's just that on those ascents he tends to chose far harder routes than the ones he does when he climbs alone. In any case, he always tries to climb them as best possible according to the given situation, which obviously means respecting the weather conditions and the difficulties of the route. It's clear that this approach gives him a comfortable margin for his solo climbs. Furthermore, he adds, solo climbs are not his life and soul, the thing he feels truly important when he digs deep inside. Because on the one hand he doesn't enjoy dealing with difficult projects on his own over long periods of time, better still, having projects that require long preparation or long stints in the mountains. On the other hand he doesn't feel the extreme need to experience these things alone. What he enjoys is experiencing solo ascents without feeling contrived in any way, without too many worries and without having to trust too much in the unthinkable.

In short, Korra enjoys his solo climbs that come about by chance (as in this case), without too much fuss, waits and worries. Banking on - obviously - as ability and sensitivity that have been honed over the years and that enable him to interpret the conditions, the ice and be conscious of the decisions he makes in the mountains. And then he adds "I really respect those who remain out on a face for days and days. At the end of the day, my approach stems from my weakness, of not loving or not being able to deal with the psychological pressure that these long-term projects require." And, we wish to add, his alpinsm seems carefully thought over and experienced in all its various facets. To deal with his desires and needs, and above all – to use the phrase used so often by alpinists – for himself.

Korra, first of all, why this route?

The route I chose is a really obvious line up the North Face of the Grandes Jorasses, it's really beautiful. I'd been thinking about if for a while and it had come into condition. I've already been up the North Face nine times before, twice up the Colton - Macintyre and I wanted to do something different, something I didn't yet know. That's why I chose this route.

So tell us more about it
The two Polish routes were both forged in summer, they ascend lines in search of the best rock. What I climbed is basically a winter version of a combination of these two routes, at times the iced sections obviously don't follow the original line completely. For the last 10 years circa this "combination" has always been climbed as a mixed route. Since then the Polonaise has become fairly well known, also because it's really obvious and comes it condition fairly often. It's been repeated a dozen or so times, and I think it hasn't been soloed before.

Until your ascent yesterday
I don't really know what to say about my climb. I'd talked to the Leschaux hut warden before setting off, she told me that the route had been repeated a few days ago by another team, so I was certain that conditions were good. I took a 50m rope, some Friends and ice screws just in case I'd need to self-belay. I then set off from the hut at 3:50 in the morning and began the approach.

Which is always a first important hurdle...
In the beginning I followed the excellent tracks that lead to the Colton - Macintyre, then I traversed off below the Croz Spur. This way I managed to avoid many crevaces and this meant that the approach was relatively straightforward. So I managed to negotiate the section which had worried me the most in just 2 hours and 10 minutes.

And then you set off up the route
Yes, and reached the crest after another 2 hours and 10 minutes. At ten past eight I was on the ridge and started the descent.

Wait! Tell us something about the actual climb!
It was quick. A series of slivers of ice. There was little mixed terrain actually, more like vertical snow. At times not excellent, it still needs to consolidate, but there's no point talking about M5+ in the version that I climbed it, far better to say WI5+. I never self-belayed and practically never stopped, just every now and then to take some photos. And since the terrain was more or less the same all the way, once I'd found the right rhythm I didn't want to stop.

You climbed it really quickly
Yes, but believe me I really wasn't after setting a record, I simply didn't want to lose the rhythm, the sections flowed quickly, one after the next and I wanted to climb tackle the unknown, such as the part below the ridge, just before topping out. But luckily this wasn't too bad, either.

Then the descent which, as you said, you already knew
Yes by now I know this pretty well, down the normal Pointe Croz route. And shortly before midday I reached the bar in Val Ferret.

The way to tell it, it really does sound like an easy stroll. But we know that quite the opposite is true
Well, as I said before I'd had this route in mind for quite a while. In truth, after this particularly rainy summer here in Chamonix we expected that the route might come into condition early, but you always need to seize the right moment. The ice up there is really ephemeral, all it takes is a warm autumn breeze for it to melt away. I'd wanted to climb the route and now I have. It's a bit like having given myself a small present.