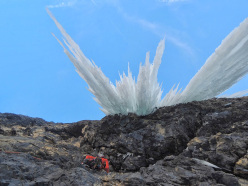 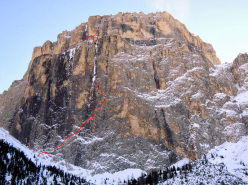 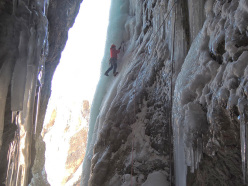 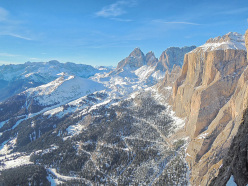 Corrado Korra Pesce and Jeff Mercier have climbed Ghost Dog (WI6 XR/M5/6a 800m) a probable new ice and mixed route up the West Face of Sass Pordoi in the Dolomites.

They travelled all the way from Chamonix to attempt a new line up Langkofel they'd spied on a webcam, but instead they climbed what might well be a superb new route on Sasso Pordoi. This, in short, is the result of the three-day tour de force of highly talented alpinists Corrado Pesce - better known as Korra - and Jeff Mercier who completed an extraordinary line up Sass Pordoi that, from time to time, forms down its immense West Face. A drip that many had laid their eyes on, that had been attempted in the past and that - according to our first research - had perhaps been climbed up to three pitches below the large ledge.

But let's get back to Pesce and Mercier. After having teamed up with Andrea Di Donato and checked out for themselves that the line up Langkofel wasn't in condition, on 3 December the trio acted on a tip-off from locals and switched objective. Sass Pordoi, they were told, seemed in condition and so the three started up Via Fedele to "check it out and understand the strategy." They climbed 150m, deposited their gear and abseiled off, leaving their ropes for the next day. "Ethically not the best" Korra explained immediately "but at least this allowed us to recover from the difficult night beforehand."

The next day the alarm clock rang early and they ascended the fixed ropes "to save previous time", then unfortunately Di Donato didn't feel well and decided to descend. Still in the dark they climbed some rock pitches and then reached the first ice, a slender and fragile 45m drip protected by two bolts placed during someone's previous attempt. The next pitch breached the large hanging dagger and led to easier terrain where they simulclimbed. "The surroundings were fantastic and the 60 - 70°m was ice very wet and easy to climb" Pesce told Planetmountain, adding "given the nature of the ice we didn't want to hang around in such an exposed location."

At this point a mere two pitches separated them from the enormous ledge but the ascent had become a race against time: at 13:30 the sun's rays would hit the icefall, rendering the climbing extremely dangerous indeed. Pesce explains "in truth the sun hit the ledge far earlier, as early as 11 the amount of water running down the drip had increased worryingly..."

A 30m pitch, behind an ice cone and difficult to protect, opened the door to final beautiful 30m freestanding drip, fortunately climbed easily by Mercier. Safely on the ledge the duo decided to stash their equipment and continue the climb the next day and so, after having dried their gear, they traversed along the ledge, belaying each other along the potentially avalanche-prone sections.

Early the next morning they ascended with skis and at dawn they were already poised for action, climbing the last 200m to reach the summit plateau. Here, as Korra explained "the difficulties weren't extreme, it's more a mix of technical sections, at times up unconsolidated, sun-baked ice and easier terrain." Once on the summit they quickly descended to the col and returned to valley.

In response to our question as to why they split their ascent, instead of continuing in a single push, Korra replied "All we'd have needed were some clouds and knowledge of the summit plateau and we'd have descended at night. This is what we'd originally planned on doing as a trio, but seeing that there were just two of us everything became more difficult. On the first pitches of Via Fedele the second climbed with 4 ice axes, two pairs of crampons, our 10 ice screws and first aid gear. We had largely overestimated various things about this adventure, such as the difficulties on the hanging dagger - that sort of formation isn't always climbed that easily and what's more the rock was splendid and could be protected without bolts. And we also didn't want to descend at night from the summit of Pordoi. Which, afterwards, seemed a bit excessive and will make those who know the mountain smile, but it's only natural when you visit places for the first time, a long way from home."

It's worth noting that this was Korra's first visit to the Dolomites and we therefore simply had to ask a final question; what was the experience like? "Great. We were both struck by the potential of mixed climbing here in the Dolomites. The steepness and the character of the climbing is impressive, the lines up rock are really interesting also because of their length. And in winter everything here is very, very beautiful indeed. We'll definitely be back!"