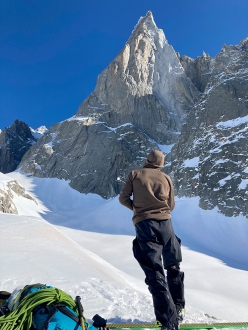 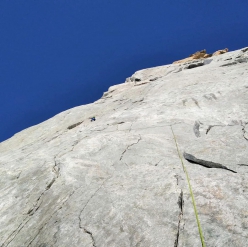 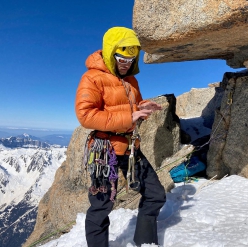 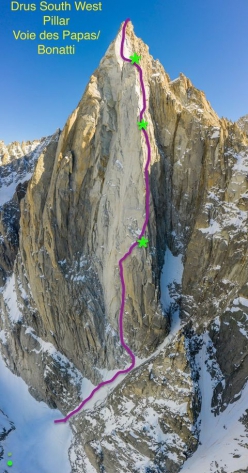 Alpinists Corrado Korra Pesce and Will Sim have repeated Voie des Papas / Via Bonatti on the SW Pillar of Petit Dru in the Mont Blanc massif.

More or less at the same time as the French team comprised of Thomas Auvaro, Léo Billon, Jordi Noguere and Sébastien Ratel were establishing a new route up the center of the West Face of Petit Dru, Corrado Pesce and Will Sim found themselves slightly further to the right, repeating Voie des Papas combined with the remains of the Bonatti Pillar.

Voie des Papas was established over a period of 9 days in January 2007 by Martial Dumas and Jean-Yves Fredricksen after huge rockfall had wiped out much of the face in 2003, 2005 and 2011, combined with the what little is left of the historic pillar first ascended solo from 17 - 22 August 1955 by Italian mountaineer Walter Bonatti.

Making best use of perfect conditions, Pesce and Sim spent four days on the climb, with three "5 star" bivouacs on the face, in order to breach the 900m, 6c/A1 line.

According to Sim their ascent, carried out after a repeat in 2012 by Jérôme Sullivan and Pedro Angel Galan, was "characterised by freezing mornings, sunny afternoons, some scary rock which required mind numbing care to navigate and haul our bag over without damaging our precious ropes, but thankfully some good bivies!"

Corrado Pesce added "Four sections, each about 30m high, are what remains of the Bonatti climb. Perhaps this isn’t much, but it’s always incredible to stumble across old pegs, even if they come out as soon as you pull on them. We were acutely aware of being on a face that had experienced a cataclysmic transformation."

The two alpinists spent a total of 5 nights out on the mountain and Korra’s words suffice in order to get an inkling about what they experienced high above Chamonix: "I've never been less interested in going back down from a mountain, I would have stayed a couple more days up there."

30.01.2019
Les Drus: Triple Couloir tracked by Julien Herry, Laurent Bibollet
French alpinists Julien Herry and Laurent Bibollet have scored the first descent of the Triple couloir on the West Face of Les Drus in the Mont Blanc massif. The two descended on snowboard.

27.04.2018
Aiguille du Dru, La ceinture des Drus descent clip
The short clip of Vivian Bruchez who on 13 April 2018 teamed up with Jean Baptiste Charlet and Jonathan Charlet to make the first ski and snowboard descent of a new line across the NW Face of Aiguille du Dru in the Mont Blanc massif.