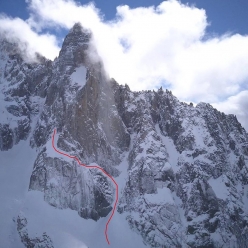 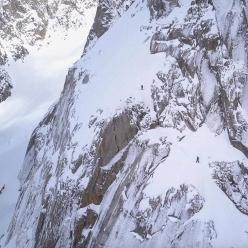 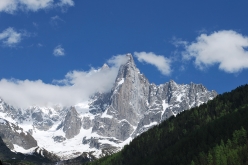 On Saturday 13 April 2018 Vivian Bruchez, Jean Baptiste Charlet and Jonathan Charlet made the first ski and snowboard descent of a new line on the West Face of Aiguille du Dru in the Mont Blanc massif.

The line is strikingly obvious, so clear that it can even be seen from nearby Chamonix. Yet it took the French trio Vivian Bruchez, Jean Baptiste Charlet and Jonathan Charlet to envision what has now become a new descent on the West Face of Aiguille du Dru.

Called "La ceinture des Drus" by the mountain guide and the two ace snowboarding brothers, the 500 meter line traverses across the mountain’s West Face close to the American Direttissima and above a huge void. This isn’t a traditional descent therefore that starts from a precise summit or col, but in any case it’s a logical "glisser" on one of the most emblematic mountains in the entire Mont Blanc massif.

"We thought about it from the beginning of winter" Bruchez told planetmountain.com, who skied the line while the Charlet brothers descended on snowboard. "We waited for good conditions to go. It was in good snow. It’s a really exposed line in the heart of Les Drus!"

The comment immediately after the descent, "No words for today…" speaks volumes about the experience. As does the conclusion "500m, no cotation."