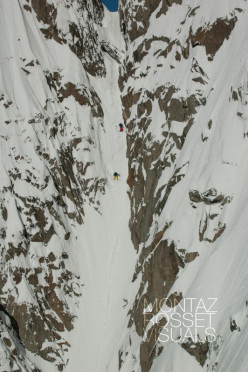 17/02/2013: Vivian Bruchez and Jonathan Charlet making the first descent of the Frigor Couloir on Petite Aiguille Verte in the Mont Blanc massif.
Photo by

On 17/02/2013 the Frenchmen Vivian Bruchez and Jonathan Charlet made the first descent of the Frigor Couloir on Petite Aiguille Verte in the Mont Blanc massif.

After the first descent of the Migot Spur on Aiguille de Chardonnet skied at the end of November 2012 together with Kilian Jornet Burgada, Vivian Bruchez now checks in with another first descent in the Mont Blanc massif: Couloir Frigor on Petite Aiguille Verte.

On Sunday 17 February the French Mountain Guide skied this narrow gully together with snowboarder Jonathan Charlet. The two spent the first part of the day together with Seb Montaz on the North Face skiing the Chevalier Couloir and while Montaz set off to take photos, Bruchez and Charlet ascended the nearby gully Couloir Gigord. The final 50 metres proved technically difficult and after a 30 minute rest the two descended the new line down the other side of the mountain.

According to Bruchez this line, which they have called Frigor Couloir, is "a beautiful outing that has all the right ingredients for a perfect day in the mountains: alpinism, steep skiing, freeride... After a technical start the descent unfolds in a really nice ambiance down a circa 400m of 45°-50° slope."

It is worth noting that the couloir is invisible from the valley below. Last year Charlet skied the Couloir des Oreilles de Lapin and he he sensed that the mountain might hold something skiable and subsequently the line was discovered on a photo of Pierre Tardivel and Stephane Brosse skiing Nant Blanc in 2009.