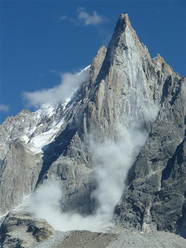 After the rockfalls at the end of August on the Mont Blanc Grand Couloir, now it's the nearby Drus which are on the move. Three rockfalls, the first on Saturday afternoon, the second on Sunday morning and the third on Sunday afternoon, tumbled down the west and north face of the Aiguilles du Dru. According to ledauphine.com, this enormous rockfall is even bigger than the 2005 slide which, in all effects, swept away out the Bonatti pillar which the great mountaineer had famously climbed solo.

At present there is little to go on apart from the fact that the tremors were felt all the way to Chamonix. And, far more importantly, according to the Peloton d'Haute montagne no one was injured. It seems superfluous to say that visiting these rock faces is highly inadvisable at present.

Sunday's impressive rock fall was witnessed by many, including Giovanni Bassanini, the famous Courmayeur mountain guide. Bassanini was on the Brevent with a client and observed the fall from the natural viewpoint directly opposite the Drus. "I noticed what was happening because of the sound, extremely loud" Bassanini told us. "The first rockfall took place at 10.30 circa. This was followed by another two, at 12.00 and 13.00. It was truly impressive. Incredible. The station at Montenvers was completely enveloped in an immense cloud of dust which hung around for more than an hour..."

Evidently last August's high temperatures have left their mark on Mont Blanc too, not only Mont Pelmo in the Dolomites…