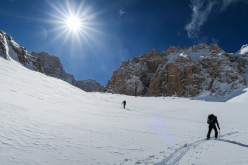 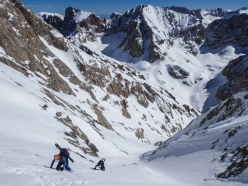 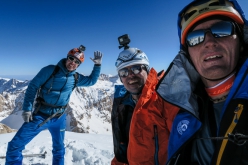 Slovak mountain guide Miroslav Peťo reports about his ski touring trip to the Ala Dağlar mountain range in Turkey with Robert Vrlák and Rastislav Križan which resulted in a number of interesting descents including what is likely to be the first integral descent of Mount Demirkazik via its South Face.

As part of our long term project Ski the World, this February we decided to have a closer look at some steep skiing lines in the Turkish mountain range called Aladaglar. Our team consisted of myself and two friends and colleague mountain guides, Robert Vrlák and Rastislav Križan. Rastislav works at the Slovak embassy in the Turkish capital of Ankara and is an experienced ski mountaineer; thanks to his many years of diplomatic services in Turkey and Iran, Rastislav has become a specialist for ski mountaineering in the Middle East region.

After our arrival in Ankara and a day sightseeing in the pouring rain, we left for a short acclimatisation trip to the volcanic massif Erciyes (3917 m), which lies on the way to Aladaglar. There is a ski resort on its east face which we used as a starting point for our acclimatizsation trip. From the top ski lift station at about 2900 meters we ascended the north summit via the so-called Angels route and skied the same way down. It was a nice and relatively easy steep itinerary surrounded by spectacular pinnacles and towers formed by volcanic rock.

The next day we transferred to the village Marti which became our base camp for our ski adventures in Aladaglar. Aladaglar is a part of Anti-Taurus mountains in southern Turkey and geologically is slightly reminiscent of the Dolomites. It is a bit higher though, with mountains reaching almost 3800 meters and obviously a lot wilder, with no mountain rescue service and no mountains huts. Since the starting points are quite low there, summit trips are very long with almost 2000 vertical meters ascent per day.

On the first day after our arrival in the Aladaglar we headed straight into its heart, into the Narpuz valley where the second highest mountain of the range is located – monumental Demirkazik (3756 m). Before departing from home on our mini-expedition, Rastislav had shown us a few photos of this beautiful mountain to get us motivated and right from the outset it was clear that Demirkazik was going to be our main objective. We reconnaissanced by skinning up to the Yasemin pass (3400 m) in difficult conditions (deep snow, avalanche danger) where we took detailed photos of Demirkazik's south face. It seemed as if there was a continuous line that could be skied from the summit via the huge south couloir. The biggest question was the mixed barrier in the lower part of the face, and even from out viewpoint on Yasemin it was unclear if this could be skied.

After the long and tiring tour up to the Yasemin pass we took a rest day and did some pleasant rock climbing in the sunny Kazikli canyon which was located only 15 minutes by car from Aladaglar Camping at Marti.

The following day we headed up Demirkazik to fulfill our dream of skiing this amazing mountain. We started early in the morning from below Sokullu Pinar camp at about 1850 meters and via the Narpuz valley needed about 3 hours to reach the bottom of the south face. In the labyrinth of pinnacles and towers in its lower part we managed to find a continuous snow line that opened a way towards the big south couloir. In soft snow it took us another 4 hours to break trail up to the summit. After a short break enjoying the beautiful views from the top we started our ski descent.

The summit section was exposed but technically moderate, much like the the middle section of the south couloir. The technical crux lay in the lower section, with some very narrow ramps, chutes and snow ribs. We were lucky to encounter good snow conditions that allowed us to ski the whole line continuously. According to information from Turkish climber Recep Ince, the manager of local campsite and an expert of the Aladaglar mountains, ours was the first ski descent of this iconic mountain.

After that long day on Demirkazik we needed another rest day. Then, with only one day left before our return, we made another long trip to the fourth highest peak in Aladaglar called Emler (3723 m). We reached the summit via the classic route from the Karayalak valley and skied down the mountain's west couloir. It was a nice end to our short but intense ski mountaineering adventure in the Turkish mountains.