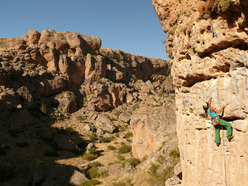 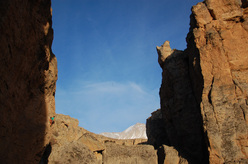 Kazikli Canyon, a sport climbing paradise in the Aladaglar, Turkey

Recep Ince introduces the Turkish delights of rock climbing at the Kazikli Canyon in the Ala Daglar region.

In recent years Turkey's Aladaglar has gained in popularity for multipitch rock climbs, but this mountainous region also contains two important areas dedicated to sport climbing: the Cimbar Valley and Kazikli Canyon, the latter of which I will describe in this article.

Kazikli Canyon received its name over a century ago from a farmer called Ali who used wooden stakes - "kazik" - to climb the cracks in the canyon to get honey from the caves. These stakes can still be seen in the canyon and due to their historical value these cracks with wooden stakes are closed for climbing.

Kazikli Canyon was discovered for rock climbing by Recep Ince, Zeynep Tantekin and Süleyman Vardal in 2003. More than 2 km long, the climbing takes place on both of its walls which average in height between 80-90m. The first routes were established that same year at the entrance of the canyon and Krallar Vadisi, one of the most popular sectors in the canyon, was first bolted thanks to the support of the Italians Maurizio Oviglia and Rolando Larcher. To date there are more than 250 routes in the canyon and the local climbing couple Zeynep Tantekin and Recep Ince have played a leading role in developing the area.