Capanna Carrel on the Matterhorn
Photo by archivio Flavio Bich

Capanna Carrel on the Matterhorn, belonging to the Cervino mountain guides
Photo by archivio Flavio Bich 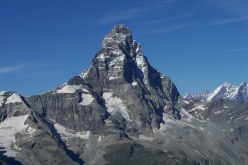 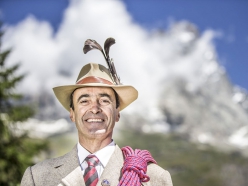 Flavio Bich, president of the Cervino Mountain Guides. Born on 16/03/1966 in Aosta, he has been a mountain guide since 1986
Photo by archivio Flavio Bich

Interview with the president of the Cervino mountain guides Flavio Bich, after the decision to restrict the places available in Capanna Carrel, the hut on the Italian side of the Matterhorn, and to make reservation obligatory in the summer months.

A few days ago the Cervino mountain guides, i.e. the mountain guides on the Italian side of the Matterhorn who own the Carrel hut located on the Lion Ridge, the normal Italian route up the Matterhorn, took the decision to limit the number of places available in the shelter and make reservation mandatory during the popular summer months. The intention, as the guides’ statement reads, "is to avoid a disagreeable overcrowding during the summer, also in the light of the serious lack of water available for all users, the difficulty in managing and disposing of the enormous quantity of waste left at the shelter, the impossibility of offering suitable sanitary facilities for too many people and also to try to reduce potentially dangerous queues and early morning overcrowding along the mountain routes." The aim therefore "solely consists in avoiding cramming more people than the actual shelter capacity, certainly not in preventing or limiting anyone from the possibility of going up to the Matterhorn summit." We spoke with Flavio Bich, president of the Cervino mountain guides, to find out more.

Flavio, quickly explain how this decision came about

Given the increased popularity in recent years, we are simply trying to ensure that not too many people stay in the hut during the summer months. When I say too many, I really mean too many. When there are 50, 60 people it’s already pretty chockablock, when these numbers double as they have done in the past then the overcrowding becomes unbearable. That's the main reason that led us to make this decision.

Capanna Carrel was built privately by the Cervino mountain guide
Yes, so all maintenance and management costs are ours. It’s important to highlight this, because the costs of running the hut are not indifferent. Gas is transported up by helicopter, the maintenance of the building itself, of the anchors and fixed ropes (which need to be replaced periodically) that everyone uses and are very happy to have insitu, is all carried out by us. And there’s no garbage truck that passes here once a week: we take down and dispose of all rubbish that everyone leaves in the hut... all with the helicopter. In short, the costs are not high and even if the town council helps out, it’s still not enough.

Currently there is no overnight fee that could help cover these costs?
No, there is no obligation to pay whatsoever. But as in all the huts there is a box where those who sleep are asked to leave a contribution; we’re asking for only 20 euros, which we don’t view as a fee for a night but as a contribution to help run the hut. I personally don’t believe people should take it for granted that there’s a mattress, blankets, gas and, above all, a roof over their heads. We’ve indicated 20 euros, frankly I don’t think it’s much yet many choose not to contribute. Having said that, I want to underline that the main reason we’re limiting numbers is to reduce the summer influx, which sometimes can even become dangerous.

You mentioned 100, 120 people
This has happened in the past. The situation becomes unmanageable, starting with the primary resource, water. There is no running water up there, and while there’s snow that can be melted at the start of the season, the later on it gets, the less snow there is for people to melt and in the end people start using really ugly, dirty ice. This isn’t good, for obvious hygienic-sanitary reasons. Then there is the very important safety issue. With so many people wanting to climb to the summit, queues form almost immediately early in the morning. Usually everyone hangs around to the first person to go, ideally a guide who knows the way, then everyone follows suit. But at the first fixed ropes someone inevitably gets stuck and people queue around for hours. We also often see people who are totally unprepared trying to climb the Matterhorn and we want to curb this, too.

On the other side of the mountain, in Switzerland, it is forbidden to sleep in the bivouac on the route and the Hörnlihütte is not cheap
That is true. In doing so they have in some ways solved their problem at its root, because you are no longer permitted to bivouac and the Solvay hut can only be used for extreme emergencies, you even risk being taken down by helicopter at your own expense. Although the easiest route runs up the Swiss side of the mountain, we’ve witnessed a vast increase in recent years. And the numbers continue to rise. This is another reason why we were forced to make this decision.

If the hut is full, on the same Italian side of the mountain there’s also the excellent Rifugio Duca degli Abruzzi. This though is located more than 1000 meters lower down.
Yes, but I believe that those who climb the Matterhorn should be able to do so in a single day. You need to be extremely fit and have a good mountaineering background in order to climb this mountain. All it takes are some clouds to roll in, or something unexpected to happen and all of a sudden the situation changes dramatically. The Matterhorn can not and should not be taken lightly.

So this is in some ways a year “zero”, an initial experiment?
Absolutely, yes. We are trying to deal with problems that are not easy to solve, we’re well aware of this. But to make the climb to the Matterhorn more pleasant and above all safer for everyone, we need to start somewhere.