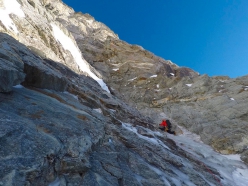 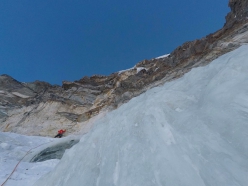 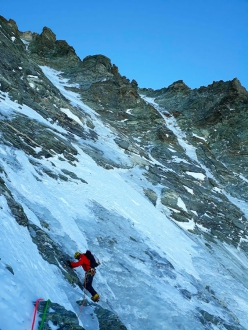 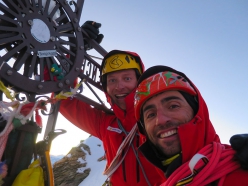 From 15 to 16 February 2019 Marco Farina and Marco Majori completed a rare repeat of Via Ottin - Daguin up the west face of the Matterhorn.

Last week the two Italian military corps mountaineers Marco Farina and Marco Majori made a rare ascent, probably only the second, of Via Ottin - Daguin up the Matterhorn’s West Face. Established in 1962 by the local mountain guides Renato Daguin and Giovanni Ottin, in 1978 this “west face direttissima" was the scene of the dramatic first winter ascent at the hands of Rolando Albertini, Marco Barmasse, Innocenzo Menabreaz, Leo Pession, Augusto Tamone, Arturo Squinobal and Oreste Squinobal. After two days of ascent in good weather on 10 and 11 January, just below the summit the Valle d'Aosta guides were surprised by a violent storm. During the descent Albertini fell to his death and Marco Barmasse, hit by falling rocks, broke his leg; after a night on the ridge they descended to the Carrel hut where, blocked by bad weather, they were recovered by a helicopter four days later.

Mountain guides Farina and Majori obviously knew the history of this cold and secluded wall all too well. "I’ve always been fascinated by the west face" Farina told planetmountain.com “I got the idea after having repeated the Bonatti and Pillory routes on the north face. Just looking at the west face is impressive! And once we were below it, we realised immediately that it wasn’t going to be easy in the slightest."

The two departed last Friday at 8.20 am from Cervinia and at around midday they reached the base of the west face, after having assessed that the north face too dry and therefore not in condition. The first part of the route ascends a wide gully, not too difficult, and then joins a series of gullies with mixed sections of mostly vertical rock and ice.

"The difficulty here was the fact that the ice was very brittle, whenever we placed some screws it simply broke away" explained Majori. After this section the two mountaineers reached a snowfield that took them to 3650 meters where at 18.00 they bivouacked on a small ledge after 10 hours of non-stop climbing.

At dawn on Saturday 16 February they climbed past mixed terrain and brittle rock that proved difficult to protect. Arriving at the so-called "yellow band" of brittle rock, they breached three overhanging pitches that demanded utmost concentration. Only here did they use two points of aid, while all the rest of the route was climbed free. After passing this technical crux they reached a frozen slope that took them to below the Matterhorn summit. Above them lay 400 meters of rock in almost summer conditions and after these final pitches they summited at 18.30. They descended to Capanna Carrel, reached after 16 hours of non-stop climbing, and the next day they continued on down from Colle del Leone westwards before returning to Cervinia on skis.