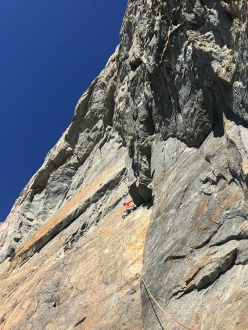 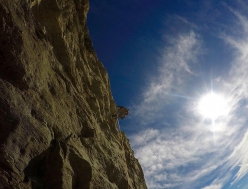 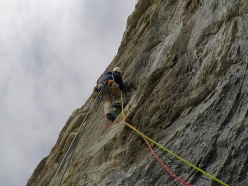 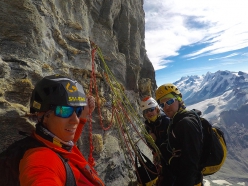 Less than a fortnight after his enchainment of the four Matterhorn ridges in 16 hours and 4 minutes with Switzerland’s Andreas Steindl, last Friday Italy’s François Cazzanelli ventured up onto his backyard mountain to complete a project on the South Face he’d started in 2012.

The new route is roughly 350 meters high and "ascends the shield below Pic Tyndall, through the steepest and most difficult section before finishing at the top of the shield" the mountain guide told planetmountain.com, adding "the shield, known as Scudo, is the rock face below Pic Tyndall that stretches from Cresta de Amicis to Via Casarotto - Grassi. From Cervinia you can see it really well, together with Picco Muzio it’s the most overhanging and continuous sheet of rock on the entire south face."

The new climb was established with the help of Roberto Ferraris, Francesco Ratti, Emrik Favre and Marco Farina in six attempts since 2012 because "the approach is very complex and not always in condition." Furthermore "the wall is very complex and it was very difficult, despite seeing it every day from my bed at home, to find a logical way through this maze of rock."

Diretta allo Scudo ascends between Per Nio (Hervè Barmasse, Patrick Poletto 2000) and Casarotto-Grassi (Renato Casarotto, Giancarlo Grassi, 1983) and does not touch either. The route was established ground-up "in a modern style, with bolts at the belays and also there where we couldn’t place any trad gear. We free climbed up to the pitch six, from then on we climbed only some sections free, the first complete free ascent still needs to be done. We estimate maximum difficulties in the region of 7a/7a+, with obligatory climbing around 6b+/6c."

The first attempt was carried out with Roberto Ferraris in winter 2012. "Initially Roberto and I set off to climb it trad and in winter! We established 6 pitches, for us a quite an undertaking seeing its location and the rock quality." From half-height onwards, however, the difficulties increase significantly, the wall becomes overhanging and “in order to climb new terrain I had to extremely fit. Francesco Ratti gave me a big hand, he was instrumental in establishing the harder pitches, without his help it would have been a whole lot harder. Francesco paved the way on pitches seven and eight, and also a part of pitch six. I'll never be able to thank him enough!" Conditions permitting, the mountaineers plan to return as soon as possible for the first free ascent.

"For me this route is a dream come true" concluded the 28-year-old "because as a child I dreamt of adding my own climb to the Matterhorn, just as my father had done in his day." (Via Direttissima up the South Face, Marco Barmasse, Walter Cazzanelli, Vittorio De Tuoni, 13/12/1983, ed).

06.11.2017
First-class Italian mountaineering in China: the Mount Edgar report
After the initial fragmentary news, François Cazzanelli now reports about the expedition to Mount Edgar (6618 m) in the Nanmengou Valley in Sichuan, China which included Francesco Ratti, Emrik Favre, Tomas Franchini, Matteo Faletti and Fabrizio Dellai. The Italian alpinists succeeded in establishing numerous routes including the first ascent of the West Face of Mount Edgar (Franchini, solo), the first ascent of the NW Face and a repeat of the original route first ascended in 2003 by a Korean expedition.