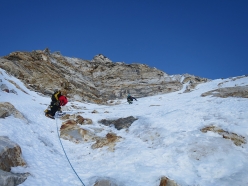 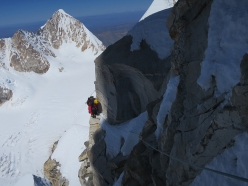 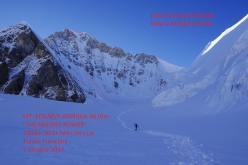 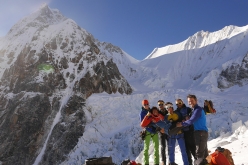 After the initial fragmentary news, François Cazzanelli now reports about the expedition to Mount Edgar (6618 m) in the Nanmengou Valley in Sichuan, China which included Francesco Ratti, Emrik Favre, Tomas Franchini, Matteo Faletti and Fabrizio Dellai. The Italian alpinists succeeded in establishing numerous routes including the first ascent of the West Face of Mount Edgar (Franchini, solo), the first ascent of the NW Face and a repeat of the original route first ascended in 2003 by a Korean expedition.

We’re not avid collectionists, but there where we were and everything was unexplored: the mountains around our base camp had no names and were unchartered on the few, somewhat approximate maps of the area. Every route we climbed was not merely a discovery, an exploration and another adventure, it was also a first ascent carried out by our group composed by Emrik Favre, François Cazzanelli and Francesco Ratti from the Valle d’Aosta and Tomas Franchini, Matteo Faletti and Fabrizio Dellai from Trentino Alto Adige.

After dealing with the various logistical complications connected to staying in China for more than 30 days, and the difficulties of dealing with our agency, we finally managed to set up base camp at an altitude of 3850 m in the Nanmengou Valley. We dreamt of Mount Edgar, a severe, difficult and insidious mountain 6618m high and climbed only twice before, once in 2003 and once in 2011. The Trentino team planned to climb the East Ridge while the team from Valle d'Aosta wanted to try the mountain’s West Ridge.

On the first day after our arrival we began our exploration / acclimatisation phase by establishing 2 new routes on two unclimbed mountains: Happy birthday Toni up a peak we called Little Edgar (5060 m) and Welcome to the Jungle up a spire we dubbed Joel Deanoz (5030 m).

After a few days we decided to check conditions and the approach to the West Face of Mount Edgar; this would prove important for the ascent planned by the Valle d’Aosta team and for the descent route planned by the Trentino team. Access to the glacier proved fairly complicated and we needed 12 hours to ascend from our base camp up to 5200 m. We were forced to equip the route that weaved its way between seracs, compact slabs and steep slopes but at the end of the day we pitched our ABC, "Campo degli Italiani" in a fantastic setting.

The following day we continued acclimatisation by climbing to the col that separates Mount Edgar from a virgin peak we quickly climbed and called Twenty Shan (6174 m). During the night Tomas decided to venture out alone, up onto the unclimbed West Face of Mt. Edgar, illuminated by the light of the full moon. He climbed a gully system and reached, not without difficulties, the final ridge. Poor snow led to the summit, reached at 6:15 am. His is only the third ascent of Mt. Edgar and he called his route The Moon's Power.

After this we spent a few days at lower altitudes exploring some rocky peaks and pillars. The Trentino team climbed Tridente Trentino, Peter Shan, Leonhard Shan, Campanile dei Pensieri. The Valle d'Aosta team turned their efforts to Melckrin Shan and made the first ascent of Pillier Gérard Ottavio and Vallée Shan.

Taking advantage of a small window of good weather, Cazzanelli, Ratti and Favre required two efforts to climb the Tre Sorelle ridge and stand on three virgin summits: Punta Barbara 5700 m, Punta Elisabetta 5800 m and Punta Patrizia 5900 m, that François named after his mother and aunts. At this point we were ready, poised, acclimatised and the weather seemed to to be on our side

On 17 October 17 Tomas, Matteo and Bicio set off up the East Ridge of Mt Edgar but their attempt ground to a halt at 5800 m. The line proved too complicated and dangerous, and so they abandoned the ascent and decided to leave the project open for future parties. Meanwhile, François, Emrik and Francesco attempted the north-west ridge and stopped 150 m shy of the main summit, on the first of two rocky pillars that characterize this ridge. We decided to call this pillar Pillier de l’Espoir (6450 m). Unfortunately, due to the cornices similar to those found in Patagonia we couldn’t continue to the summit of Mt Edgar, and after a15-hour day and more than 25 rappels we returned to Base Camp in the dark.

A few days were spent at base camp clarifying ideas and recuperating. In the meantime winter set in, it began to snow and temperatures dropped. We decided to play our last card and, when a small weather window appeared, we split into two teams: Faletti, Cazzanelli and Franchini who wanted to try and climb a new route up the NW Face of Edgar, while Favre, Dellai and Ratti chose to make a dash for the summit via the 2003 Korean route.

Despite a difficult night up in our high camp exposed to the strong gusts of wind, we all set off in the dark early the next morning. We were fortunate and at 13:00 we all reached the summit! One team reached the highest point via a new route called Colpo Finale while the others joined them after having followed the South Ridge. Clockwork precision! Unbelievable. Tired but immensely satisfied we descended to the high camp and celebrated with an excellent bombardino liquor we’d brought from Italy.

We had a fantastic experience, in a valley “all for us”, a true adventure in unexplored mountains ... we climbed and discovered a new corner of the world and managed to climb Mount Edgar, a complicated, difficult and dangerous mountain from all aspects… we spent 40 days together, immersed in nature… what more could we ask for?!