► News ► Events ► Piolet d'Or, the winners and alpinism of the future
Versione italiana 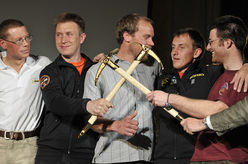 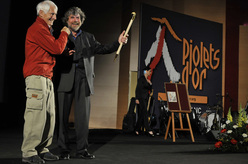 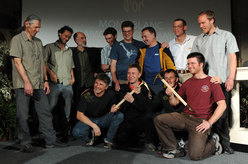 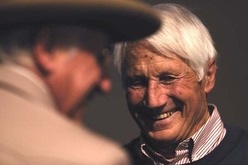 PORTFOLIO / gallery Portfolio: Piolet d'Or, the winners and alpinism of the future

Piolet d'Or, the winners and alpinism of the future

The Piolets d'or 2010 were won by Denis Urubko and Boris Dedechko for their route on Cho Oyu and by Jed Brown, Kyle Dempster and Bruce Normand for their route up Xuelian West. Reinhold Messner received the lifetime achievement award; Walter Bonatti star guest at Courmayeur.

Like last year, 2010 turned out to be a multiple Oscar year. Two golden ice axes were awarded last weekend while last year - the first of the new "series" - there had been three. The 18th Piolet d'Or went to the Kazak mountaineers Denis Urubko and Boris Dedechko for their new route up the SE Face of Cho Oyu, one of the 14 highest peaks in the Himalaya, and also to the Americans Jed Brown and Kyle Dempster who, along with Bruce Normand from Scotland, forged a new line up the remote North Face of China's Xuelian West.

This decision certainly pleased many, because the awards not only recognise two great ascents but also the style with which they were carried out. This is unsurprising as the jury, presided by the Slovenian all-time ace of alpinism Andrej Stremfelj, was absolutely authoritative. Nevertheless, this decision failed to brush aside the doubts which accompany all awards for alpinism and, obviously, even more so the Piolet: is it ever possible to decide if a single ascent is better than another? In many respects this question and doubt is an idle one and shared by all prizes, regardless of what they are for. But it confirms and reveals in climbers themselves the continuous anxiety and search for a "meaning" and "depth" of their activity. A sense which, ast the start of this millennium, is increasingly difficult to unearth and, importantly, share with others, with the world in general.

So the recently concluded Piolet d'Or, hosted between the Courmayeur and Chamonix, turned out to be as expected. The two towns are located - not by chance - at the foot of Mont Blanc, the mountain which over 200 years ago gave birth to modern alpinism. This is a Piolet which, much like alpinism itself, is searching for its own direction. For a vision and, perhaps, also a current definition of alpinism itself. This is why it comes as no surprise that the true stars of this edition were Reinhold Messner and Walter Bonatti. The former, the king of the 8000ers and alpinist with seven lives, received the Piolet Lifetime Achievement Award, inaugurated last year by the latter, the living legend of alpinism, the one of has probably fuelled the dreams of the modern generations of alpinists more than anyone else. Their embrace (not only metaphorical) and their presence sent a clear symbolic signal. It indicated a direction or, better still, an attitude. Both stated that this is a confirmation of the value of "traditional alpinism" which, Messner specified, is that carried out "by fair means." Using a phrase coined by British alpinism, Messner interprets this as getting "as far as possible" using one's own resources, without the use of technical support or with the minimum use possible. Messner's alpinism is one of "exposure", of putting oneself consciously at the very limits of nature itself. But also the art of knowing when to turn back, of giving up, and also of surviving. Yes, of pushing oneself, fairly, "up to wherever possible."

Messner and Bonatti as reference points, as a reason for a decision and a direction in which alpinism might be heading. But also as examples of the need and ability - which both proved to have - of going "beyond" alpinism, of living their lives and their experiences further afield, while searching for new horizons. Perhaps this is why Messner wished to remind the packed press conference that we are currently living through a period of what he defines as being an alpinism of "risk". This stands in contrast to his alpinism (and that of Bonatti) of "renouncing", of doing without "technical means and infrastructure" combined with the sensitivity towards environmental and social issues which now more the ever before are an issue in the mountains, in the wilderness and in nature itself. This is an important indication from the man who in the most recent of his many lives is dedicated to publicising the culture of the mountains and also what is in the "psyche" of a mountaineer and man. Perhaps this is the direction for an alpinism which demonstrates itself as being aware of the times, of what is going on in the world. This task, that of mountaineering which looks at the world with different eyes, seems to be a problem of western alpinism. Not only because of the five nominated for the Piolet d'Or, the majority (three) were carried out by teams from the east.

Returning to the Piolets d'Or: the one awarded to Denis Urubko almost seems like a much deserved prize. This was the third time that the Kazak alpinist had been nominated for the Piolet. As always for a new route up an 8000m peak, but in the past he always had to "give way" to someone else, seeing that along his path he encountered super teams in the form of Steve House and Vincent Anderson (2006) and Marko Prezelj and Boris Lorencic (2007). Now it's his turn, rightly so, with another new route, first ascended together with Boris Dedechko on the seldom climbed SE Face of Cho Oyu. This ascent marked - and this is not to be underestimated - the end of his tour on the fourteen highest peaks in the world. Talking of which: this too was record breaking, with three new routes (Broad Peak, Manaslu, Cho Oyu) and one first winter ascent (Makalu, together with Simone Moro), always cartried uot is lightweight style, a true Garibaldian of the east. Thanks to these ascents Urubko is certainly to be considered one of the most important Himalayan alpinists of the last decade. We can easily imagine Urubko's joy at receiving the award - on the eve he was sincerely sceptical as to whether he would win the prize or not. We're certain that a thought and dedication went to Serguey Samoilov, his partner during the other two nominations ho died last year during an attempt to carry out the Lhotse-Everest traverse.

What is striking about the other Piolet d'Or - which went to the team formed by Scotsman Bruce Normand and the Americans Jed Brown and Kyle Dempster - is the total adventure they experienced climbing the unknown mountains in the north of China, which blossomed into the beautiful and difficult climb up the north face of Xuelian West (6422m). Totally out there (to use Messner's phrase), combined with the fact that up until the climb the three hardly knew each other, mean that this Piolet is a nice surprise. Creativity, courage and the spirit of adventure still pay off!

What remains to be discussed is the future of alpinism. This is a theme which, as mentioned at the start, oozes through the Piolet d'Or. But since the future is unknown to all, what seems interesting to us is to mention a small event which took place in Courmayeur on Thursday, as a prologue to the Piolet d'Or. The evening programme was dedicated to the new generation of alpinists, in particular to "family" partnerships, a clear homage to the brothers Reinhold and Günther Messner. Marco and Hervé Barmasse took to the stage, after having ascended their difficult and beautiful new route up the South Face of the Matterhorn. This father-and-son team was joined by Simon and Samuel Anthamaten, by Hansjörg Auer and Vitus Auer, and by Iker and Eneko Pou.

The evening turned out to be extremely pleasant and it showed the human aspect of alpinism as well as the great (and young) climbing teams. The evening was rendered all the more precious by a surprise guest, Walter Bonatti. We witnessed the eyes of these climbers light up as they saw Bonatti. And we say great Walter smile happily at their replies and their thoughts about alpinism. And then - after the Pou brothers had defined their alpinism as one in which they want to "have fun", one which is far removed from the suffering which often result in Piolet ascents - hearing Bonatti state that their definition is "perfect", made our hearts feel warm. Yes, here is a shy hope, if this dialogue continues. If this is respect for the experiences of others. If alpinism itself opens its eyes to the world, to see today's reality. For an alpinism which wants to move forward!