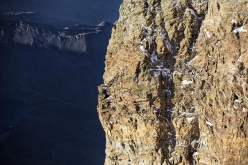 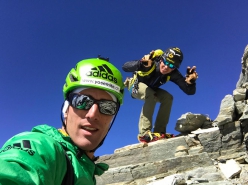 Interview with Italy’s François Cazzanelli who on 12 September 2018 teamed up with Switzerland’s Andreas Steindl to climb all four ridges of the Matterhorn in just 16 hours and 4 minutes.

At 2:20 am on Wednesday 12 September, 28-year-old François Cazzanelli and 29-year-old Andreas Steindl left the Hörnli Hut and, in the next 16 hours and 4 minutes, climbed all four ridges of the Matterhorn. Starting with the easiest crest, the Hörnli Ridge they raced up and down in just 2 hours and 25 minutes. Next in line was the trickiest from a technical point of view, the Furggen Ridge which led them to the summit for a second time after another four hours. Again they raced down the Hörnli Ridge, then reached the summit two more times, via the Zmutt ridge o(3:40) and then the Lion’s ridge (1:40). 15 hours after having set off Cazzanelli and Steindl reached the 4478m summit for the fourth and last time, before descending with utmost care to the Hörnli Hut. When the entered the clock struck 6:24 pm; 16 hours and 4 minutes had passed, they’d just ascended and descended 9600 meters.

The first to climb all four ridges in a single day were Hans Kammerlander and Diego Wellig who on 19 August 1992 required 23.5 hours. The first winter enchainment of all four ridges - obviously in a different sequence - was carried out solo in 2013 by Hervé Barmasse.

François, how does a project like this come about? Definitely not out of the blue, seeing that a fortnight ago Steindl did Zermatt - Matterhorn and back again in under 4 hours

A project like this is the end result of an important preparation. We started talking about this project last winter and after a summer of training we were ready to go.

Just like Kammerlander and Wellig, you are an Italian-Swiss team!
Indeeed! But the beautiful thing, the one that unites me and Andreas, is that we are two Matterhorn mountain guides, albeit on the two opposite sides of the mountain!

So what have you done together in the past?
A fair bit: the record on the Signal Crest, an important enchainment on the 4000ers above Zermatt and Saas Fee to name just two... and of course plenty of training sessions in the run up to our Matterhorn climb

Why did you ascend the ridges in this order?
It seemed the most effective way of doing them, bearing in mind the conditions and the weather window.

What style did you adopt?
We tried to be as efficient as possible, but always kept a good safety margin.

What translates as?
We used the best technique based on the terrain we were climbing. We didn’t always tie in to the same rope.

Did you both know all the ridges?
We knew the Zmutt, Hörnli and Leone well, but Andreas had never climbed the Furggen Ridge, and I’d only done it once in winter.

What was the most difficult part of the climb?
The part of the ridge from the Zmutt Teeth that leads to West Face, because the snow wasn’t good and we began to feel the exhaustion set in.

Did you have any support along the routes?
At the summit and on the Lions Ridge were: my father, my cousin, Stefano Stradelli, Marco Camandona, Roger Bovard and Jerome Perruquet, to take some photos and videos.

You guys were quick. Did you have time to have fun?
Yes! If we hadn’t had fun, it would have been impossible to complete it!

Now that you've done it: what do you think of the ascent carried out by Kammerlander and Wellig back in 1992?
They were forerunners! Thinking about and then implementing this project 25 years ago was truly futuristic.