Andreas Steindl Matterhorn speed: racing up towards the summit
Photo by Samuel Anthamatten 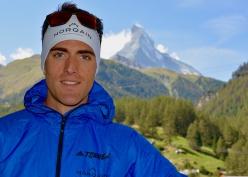 Andreas Steindl with Matterhorn in the background
Photo by Samuel Anthamatten

PORTFOLIO / gallery Portfolio: Andreas Steindl sprints up and down Matterhorn in 4 hours

Andreas Steindl sprints up and down Matterhorn in 4 hours

On Monday 27 August 2018 the 29-year-old Swiss mountain guide Andreas Steindl ascended and descended the Matterhorn via the Hornli ridge at breakneck speed, requiring 3 hours, 59 minutes and 52 seconds for the round-trip from Zermatt.

Usually a guide with a good client requires 1 hour to descend from the summit of the Matterhorn to its shoulder. On Monday 27 August Andreas Steindl needed just 8 minutes... A mere 460 seconds in his wild rush from the church in the center of Zermatt to the top of the Matterhorn and back again, for which the 29-year-old mountain guide required a jaw-dropping 3 hours , 59 minutes and 52 seconds.

Born and raised in Zermatt, Steindl obviously knows the Matterhorn like the back if his hand and prior to his speed ascent he’d reached the 4478m summit 88 times. On Monday Steindl set off at 9:10 am from the church at 1616 m and, having passed the Schwarzsee at 2587m and the Hörnl Hut at 3260m he reached the summit after 2:38:37. A full 20 minutes faster than the time he needed in 2011. The Swissman descended via the same Hörnli ridge and stopped the clock back at the church after 3:59:52.

"The most difficult part in this project" explained Steindl "was staying focused, which was not equally easy everywhere. Especially descending you need maximum concentration. The air is thin, you have reached the summit and are already tired, but now you must keep the pace high on the way down, and especially your concentration. To climb down very fast and without any protection was the most difficult and also most dangerous part of this mission." Apart from a quick pitstop at the hut to grab a drink of water both during the ascent and descent, Steindl was not assisted in any way.

No similar undertakings from and to Zermatt have been documented in the past according to Steindl, who concluded "a personal long dream came true."

In 2013 the Catalan Kilian Jornet Burgada climbed the Matterhorn via the Italian Normal route, making his roundtrip from the church at Cervinia in 2:52:02.

26.08.2013
Kilian Jornet Burgada: up and down the Matterhorn in less than three hours.
Giulio Caresio analyses the visible and invisible aspects of an extraordinary achievement: the record-breaking ascent and descent of the Matterhorn in 2:52:02.