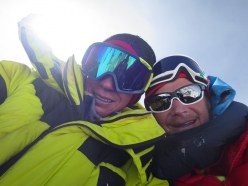 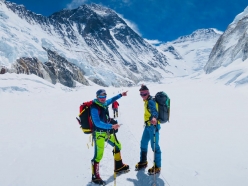 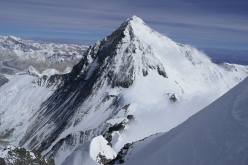 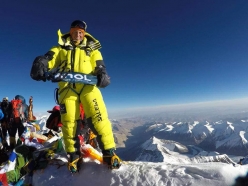 The Italian alpinists Marco Camandona and François Cazzanelli have climbed Lhotse without supplementary oxygen. The latest updates from Everest.

Italian mountaineers Marco Camandona and François Cazzanelli have reached the summit of Lhotse, at 8516 meters the fourth highest mountain in the world, without the use of supplementary oxygen. The two Valle d'Aosta mountain guides are currently descending and have let their team know they are doing well.

Lhotse is Camandona’s is eighth 8000er without O2, while its the first for young Cazzanelli. The success concludes an important week: six days ago Cazzanelli guided with the use of O2 Italian astronaut Maurizio Cheli to the summit of Everest, helped by Sherpa Ramesh Gurung and Nima Rima Sherpa. Camandona, on the other hand, had abandoned a summit attempt with his client because the supplementary oxygen needed to guarantee the safety of all expedition members arrived at the South Col too late.

After almost 10 days of "perfect weather" there has been a record-breaking number of Everest sumits. The alpinist and chronicler Alan Arnette estimates around 640 (409 from Nepal, 231 from Tibet), almost all with supplementary oxygen. Inevitably there have also been several deaths unfortunately, notably 35 year-old Japanese Nobukazu Kuriki who perished close to Camp 2 at 7200 meters. This was his eighth attempt at scaling Everest without supplemental oxygen. Damai Sarki Sherpa died after falling into a crevasse near Camp 2 on the Nepalese side of the mountain, while Pasang Norbu Sherpa died at 8550m during a summit push from the Tibetan side while working for the 7 Summits Club commercial expedition.

16.05.2018
Everest oxygen failure accidents avoided
During an Everest summit bid members of a commercial expedition had to descend rapidly from circa 8500 meters when they experienced oxygen bottle regulator failures.

06.05.2009
Bolts on Everest
A team of Mountain Guides and Sherpa have placed some bolts on Everest to make the South Face route safer.