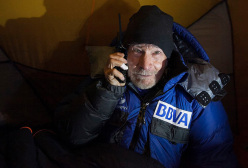 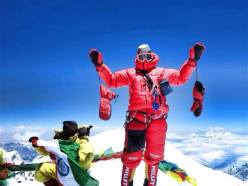 At 9:40am local time on 19 May Russian alpinist Denis Urubko reached the summit of Kangchenjunga from the north, while Italy's Marco Camandona summited yesterday from the south as did Spain's Carlos Soria. This is the 75-year-old's 12th 8000er.

Kangchenjunga summit for Denis Urubko! As usual there is little information to go on at present, apart from an SMS sent by the Kazakh mountaineer confirming that he had reached the 8586m high summit of the world's third highest mountain at 9:40am local time. Urubko sent the message from Camp 4 but wanted to descend to Camp 3 and sleep there.

Urubko had spent the last few weeks on Kangchenjunga together with Artiom Braun, Alex Txikon, Dmitrij Sinev and Adam Bielecki intent on establishing a new route up the north face but it seems as if, after having established a variation start to 7050m, they then continued up the British North Ridge route first climbed in 1979 by Peter Boardman, Doug Scott and Joe Tasker.

Precise details of the recent ascent will come in due course and when all are safely back in Base Camp but the recent success surprised many as, in his last SMS on Sunday, Urubko had stated they planned to descend. In fact, on Sunday the trio comprised of Adam Bielecki, Dmitri Sinev and Alex Txikon had made a summit bid but at 16:30 they were at 8350m, too low and too late to continue on to the summit and so they returned to Camp 4. There they joined Urubko and Braun who had abandoned their summit bid slightly earlier, at 7650m due to the perilous snow conditions. The idea was to descend together the next day, but evidently Urubko mulled this over in his sleep last night... Throughout the last decade Urubko has got us used to everything. He is without a doubt of the most talented Himalayan mountaineers of all times: 14 x 8000ers without supplementary oxygen, via 3 new routes, first winter ascents on Makalu and Gasherbrum II, winner of the Piolet d'or 2010 as well as numerous other nominations...

The summit of Kangchenjunga was also reached from the south yesterday by 75-year-old Spanish alpinist Carlos Soria who has now climbed 12 of the Himalayan giants. After having rested in Camp III he is expected to reach Base Camp any minute now. Summit success also for Italy's Marco Camandona who has now climbed six 8000ers, while his expedition companions Emrik Favre, François Cazzanelli and Marco Confortola were forced to turn back from above 8000m.