Adrian Ballinger and Emily Harrington training prior to climbing Cho Oyu in Tibet, at 8188m the sixth highest mountain in the world.
Photo by Louder than 11 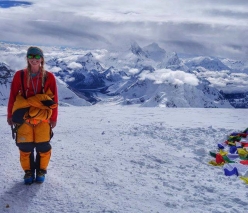 Last season America’s Adrian Ballinger (40) and Emily Harrington (30) carried out a lightening fast ascent of Cho Oyu in Tibet that may well significantly change the face of commercial expeditions and high altitude mountaineering. After training extensively at home in California, the couple travelled to the sixth highest mountain in the world, climbed to the top with the use of supplementary oxygen from Camp 2 at 7,200 meters, and then skied back down to base camp before making their way back to Lake Tahoe. Astoundingly, the duo stood on the 8201m summit in just 9 days after having left home, and the entire round-trip lasted a14 days…

In the past expeditions have taken somewhere in the region of two months, and this extraordinary speed came about thanks to perfect conditions on the mountain as they climbed the normal route with Sherpa support. Furthmore, the attibute the speed to having "acclimatised" at home by sleeping in hypoxic tents and training with reduced air in order to stimulate their body to create red blood cells which then enabled them, they believe, to climb the mountain without intermediate camps and in a single 18-hour push. While hyperbaric chambers are nothing new and there is no scientific basis for their effectiveness, the speed of this ascent may certainly be appealing to those whose most valuble comodity is time.