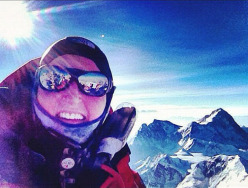 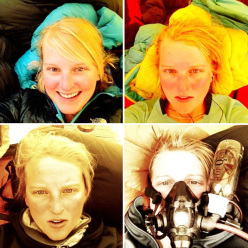 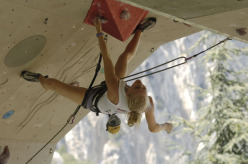 Emily Harrington on the top of Everest? Wait a second, Emily Harrington? The same Emily we had met years ago in the World Cup in Lecco and in the competition circuit? The one who in 2005 Lead World Championship in Munich just missed out on the titanic achievement and had to "settle" for beautiful silver behind a truly unbeatable Angela Eiter? That same Emily, the multi-American sport climbing champion, who had caught our attention and delighted us the Rock Master in Arco...? Yes, she's the one. Just a few days ago, on 25 May to be precise, the 25-year-old blonde American reached the highest point in the world during an expedition led by Conrad Anker, an alpinist who certainly needs no introduction. The path which Emily has taken ever since leaving competitions and the recent summit intrigued us and she has kindly provided this brief but intense interview.
Hers is a voice and testimony which joins the others we have already published during this "crowdy" Everest season. And Emily talks about the draw that mountain exerts on everyone, regardless of who they are. Indistinctively of whether they are calibre alpinists such as Conrad Anker and Ueli Steck (and just a few more this year) who climbed without oxygen. Or athletes who have very little alpine experience such as her. Or simply men and women who dream of setting foot on the highest mountain on earth. For all, and even Emily seems to confirm this, the ascent with or without oxygen (despite being two completely incomparable styles) remains a huge and unfortunately also very dangerous undertaking. This "awareness" is perhaps the key, possibly the most important "cultural" point worth underlining. As such it is a departure point for a more sustainable Everest, where being prepared (both physically and technically) is indispensable and where turning back and failure can be "normal" occurrences and an integral part of this mountain.


Emily, how come a climber like you with a a great competition background is suddenly on the top of the highest mountain in the world?
I've been trying to branch out a bit more in the past few years. I've learned how to ice/mixed climb and am doing a lot more rock climbing as opposed to gym training and competitions. I lost my passion for the latter, but still love climbing, and was curious to explore it in all forms.

Everest, a dream come true?
Climbing Everest itself was never really a dream of mine, and even though the objective of the trip was to reach the summit, we had a lot of other goals as well. We participated in medical research for the Mayo clinic, to help doctors understand the effects of altitude on the body and relate it to cardiovascular disease. Some geologists from Montana State University were also a part of our team, and they conducted field research that has never been done before on the mountain, as well as put together a curriculum for school children to educate them on climate change and geology in the Himalaya.

So how was the ascent?
Climbing Everest is very different than climbing other mountains, in that it's very commercial and you ascend fixed lines the whole way up. It was cool, but I think I would learn more from climbing some smaller, more technical peaks in the future. In the end though, it wasn't about climbing Everest at all, but the lessons I learned from the more experienced members of the team and the friendships I made along the way. Being in the high mountains for such a long period of time really strips a person down to who they really are, there are no alibi to hide behind, and I learned so much about myself through this process. Including a strength and mental toughness I never thought I was capable of. That is what I am most thankful for.

Talking of strength, how did it go with great Conrad Anker?
Conrad is the reason I was allowed to go on this trip. He is a great mentor and an incredibly strong alpinist. I've learned so much from him through the years and am so grateful to him for everything he's done for me.

Can you provide some technical details about the ascent?
We left Camp 4 at 9:30pm on May 24 and I summitted on May 25 at 6:30am. I slept on oxygen at Camp 3 and climbed to Camp 4 with one bottle on 1.5 liter flow. I climbed to the summit and back down on two bottles at 2 liter flow.

last question: now that a few days have gone by, what impression do you have about this adventure?
It was an overwhelming experience in many ways. I am still trying to understand it all. One thing is for sure, this trip has changed me in a lot of ways.