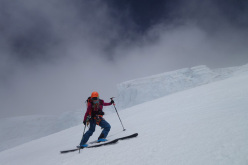 In autumn 2015, Emily Harrington, Adrian Ballinger, Hilaree O’Neill and Jim Morrison traveled to Nepal’s Himalaya to climb and ski Makalu, at 8462m the fifth highest mountain in the world. This was Harrington’s first attempt at an 8000er without supplementary oxygen - in 2012 she summited Everest with O2 - and this is her personal story of their very ambitious attempt of a feat which had never been achieved before.

Ultimately the summit push was abandoned due to unstable snow conditions, the entire team returned safely and Harrington walked away all the wiser, stating: “Success is a privilege, a gift from the universe that if we aren’t careful can obscure our judgement and instill the illusion that we are better than we actually are. Failure strips us down, causes us to question ourselves and analyze our strengths and weaknesses unclouded by any sort of overshadowing triumph. In this way failure is also a gift, arguably a more powerful one than success.”