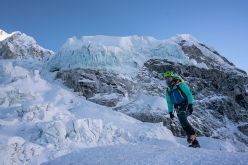 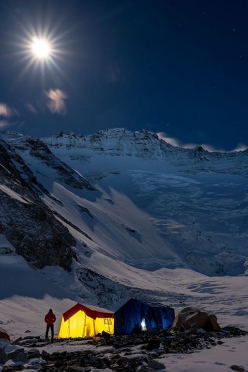 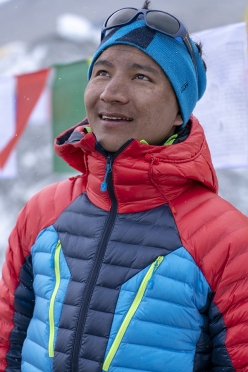 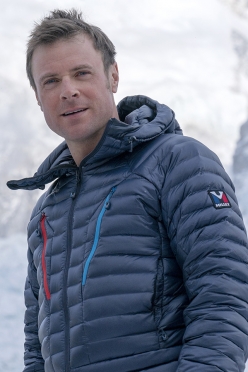 Interview with British mountaineer Jon Griffith on expedition in Nepal where Sherpa Tenji will attempt the famous Everest - Lhotse traverse without supplementary oxygen. Griffith is coordinating the live streaming of the ascent in memory of his close friend Ueli Steck who planned this enchainment last year.

This spring season promises to be an exciting one on the slopes of Mt Everest with circa 275 climbing permits issued for the highest mountain in the world. Two expeditions in particular stand out, both, as it happens, sharing the highly ambitious goal of completing the coveted Everest - Lhotse traverse without supplementary oxygen: 41-year-old Romanian Horia Colibasanu and 53-year-old Slovak Peter Hamor who hope to achieve this feat by first climbing Everest’s West Ridge route, and Sherpa Tenji who plans on climbing Everest’s Normal Route before enchaining neighbouring Lhotse. Needless to say both expeditions are cutting-edge and what makes Sherpa Tenji’s particularly interesting is that, if all goes well, it will be followed in live streaming by Jon Griffith who will follow Sherpa Tenji on supplemenatary oxygen. Griffith had originally thought of this idea together with the late Ueli Steck who died a year ago to the day while acclimatising on nearby Nuptse. The project had been extremely low key until only recently, whe Griffith broke the news telling the climbing community “I’m excited to be shooting Ueli’s climbing partner Sherpa Tenji attempt to finish off what Ueli had started, and in his style. For me it’s about honouring the memory of one of my closest friends and bringing the Nepalese climbing community to the main stage.” planetmountain.com interviewed Griffith to find out more.

Jon, what makes this project special in your mind?

It's a project of many parts. I started this off two years ago with Ueli Steck as I wanted to shoot him doing the Everest Lhotse traverse in Virtual Reality. As a cameraman, my passion is to bring people to locations that they could never otherwise access. I know it’s a bit cheesy to say that but it’s the truth and that’s what has led me to try and document hard climbs and remote locations around the world. When I first saw VR I thought “wow this is the most effective way of bringing people to these locations”. And it’s true, it’s just so powerful. But it’s not easy to shoot properly by any means. It also led me to think about doing a Live Stream of the ascent as well. As we all know Ueli passed away last year and after some alone time I realised that I really wanted to finish this project off. It was partly to finish off the biggest project that me and Ueli had ever thought up, but also because I wanted to say goodbye to Ueli on the traverse.

And it’s with Sherpa Tenji
Yes. Many years ago Ueli took Sherpa Tenji under his wing and taught him how to climb all over the world. He was definitely his mentor in many ways. Having Tenji attempt the traverse without O2 was a really beautiful story for me, and for me personally it’s a really nice tribute to Ueli to have Tenji and myself finish off his last climb and for Tenji to attempt it in his style. So like I said there is definitely a two part story to this. It’s a deeply personal project for me, as well as the most complicated mountain filming production I’ve ever attempted. I’m pretty sure that my brain is going to be completely wiped out once it’s all finished.

The Everest season is coming into swing. But news about this has only been published now
It’s always a bit of a fine line trying to balance the media side with the purist side of mountaineering. It’s something that I’ve always struggled with as a cameraman and I’ve always erred on the side of caution I think in my career- trying to keep media hype down and not appear to ’sell out’ as if it were. But it is a tricky balancing act. In this instance it’s not one that I am necessarily proud of because Live Streaming really is what most climbers would consider "too much", and to be honest I would agree. But I also really liked the idea of connecting people from around the world to a genuine ascent of Everest. We are capturing a very rare moment in Everest media and we’re in a position to bring cutting edge Himalayan climbing to people Live around the world and I think that’s really cool. In addition the focus now is on a Nepalese climber and we get to give that community of often overlooked climbers the centre stage to show their strength to the world. So much of Everest media is nothing that special in terms of climbing ability, but now we get to do something really different and unique and I really like that.

And down below?
Our Live Streaming is managed by an engineer at Base Camp so that we don't have to worry about satellite connectivity up high. But that whole side of the production is another story. It’s a hugely complex setup but the idea is to do as many updates as possible and in excellent quality rather than just doing one on the summit- it’s about doing it right rather than just being the first to do it.

What's the plan
I’m not sure anyone really knew what route choice Ueli had his eyes on last year. The Everest-Lhotse link up was a major objective and goal that he was fixated on and he knew that going via the Hornbein greatly reduced his chance of completing it. When we talked about it we talked more about the link up via the ’normal routes’ rather than via the Hornbein. To be honest I can see how if the Hornbein had been in exceptional conditions he would have gone for it but even when we talked about the link up via the normal routes he wasnt entirely sure that he would be able to do it. I think it speaks volumes to the difficulty of doing the travese via the Hornbein. The Link Up via the South Col was definitely one of his options and given that we’re not capable of trying his primary objective we’re going to be attempting this option - but that doesnt mean it’s going to be easy for Tenji. There’s a good reason the link up has never been done before by any route without supplementary oxygen!

Is there a sort of “ideal timetable”?
Ideally we would aim for our summit climb around the 25th May

How can people follow progress?
Whilst we’ll have media on our social media channels we’ll be posting the majority on the National Geographic Channels and the Live Streaming itself of the actual ascent will be hosted there as well. And I’ll also be posting updates on my social media channels www.instagram.com/jongriffithphotography/ and www.facebook.com/JonGriffithPhotography

One last question Jon: what’s the spirit of this expedition
We’re not trying to be the first. This isn’t a competition, we’re certainly not trying to beat Horia Colibasanu and Peter Hamor. Should they succeed I’d be incredibly psyched for them. If we succeed I’ll be just as psyched. This is about completing a project I’d first started with Ueli. About my way of saying goodbye.