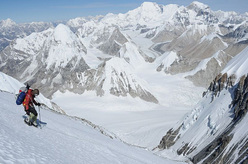 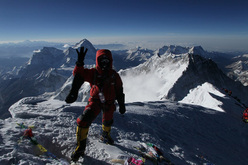 Simone Moro on the summit of Everest
Photo by Simone Moro

On 23 May Silvio Mondinelli, Gerlinde Kaltenbrunner, Abele Blanc, Michele Enzio and Marco Camandona reached the summit of Everest from Tibet. On 22 May Simone Moro reached the summit, once again with the use of supplementary oxygen.

First story. They reached the summit together, slightly before 9am Italian time, yesterday 23 May. All five mountaineers climbed without supplementary oxygen, and this needs underlining: this season they are the first to achieve this from the north. The group was formed by Gerlinde Kaltenbrunner who has now climbed 13 8000ers and Silvio Mondinelli. As everyone knows this Italian concluded his tour of the 14 highest peaks in the world in 2007 - the 6th to do so without supplementary oxygen - but like all those truly in love with thin air, he is continuing to live out his Himalayan adventures. Kaltenbrunner and Mondinelli were in the company of Abele Blanc, the impressive Mountain Guide from the Aosta valley who has already climbed 13 8000m peaks including Everest, but he chose to return to the roof of the world to touch it without supplementary oxygen. And then there was another Valle d'Aosta guide, Marco Camandona, Blanc's companio in 2000 on K2 during that adventure which , together with Waldemar Niclevicz, resulted in the summit but above all a memorable descent. Last but by no means least, these four were joined on the summit by Michele Enzio, the highly skilled alpinist and skier who after Shisha Pangma has now climbed two 8000m peaks and has crowned a sort of "revenge" on Everest after his unfortunate attempt in 2008. As we go to press the group should be on their way to Base Camp, which will mark the true end to their adventure.

Second story. On Saturday 22 May Simone Moro reached the summit of Everest for the fourth time. The alpinist from Northern Italy (protagonist of two great winter ascents on Shisha Pangma and Makalu) ascended from the south, from the Nepalese face in a 48 hour time frame. Once again though he failed in his intent to climb Everest without supplementary oxygen. Something went wrong along the way. Moro stated on his blog "In fact when I arrived at South col 8000m coming from 6300 m of C2, the weather deteriorated and started to snow. After 2 hours the sky got clearer but the temperature dropped. So I started to climb after midnight without oxygen but my fight against the cold started, too. At 8500 meters I lost sensitivity in my feet and hands and to avoid dramatic frostbite I decided to use oxygen for the last 300 meters. At 6:25 I arrived on the summit and enjoyed that moment for the 4th time . Probably I will go back for the fifth time to attempt a no oxygen climb but I’m happy also for this climb. I had a wonderful view from the top and realized how free and lucky I am to enjoy this life….

It's clear that these two very different stories. But they are two stories which start from the same awareness of the objective difficulties and, if you want, the "importance" of an an ascent without supplementary oxygen above all on mountains such as Everest, K2, Kangchenjunga and Lhotse... on the giant of giants in the the Himalaya. For Moro, who is well aware of this facet, Everest without O2 remains a match will still needs to be played. While for Gerlinde Kaltenbrunner the match she needs to finish is the long ride across the 14 highest mountains without supplementary oxygen - only K2 is now missing from the agenda. It's and adventure which - a few days after the end of Miss Oh Eun-Sun and Edurne Pasaban's journey (first and second woman to have climbed all 14 8000ers) - has a unique and unmistakable depth of meaning.