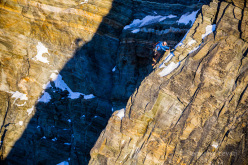 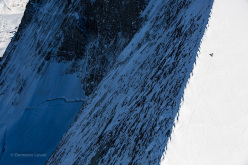 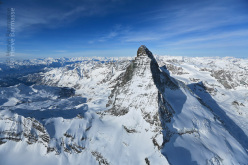 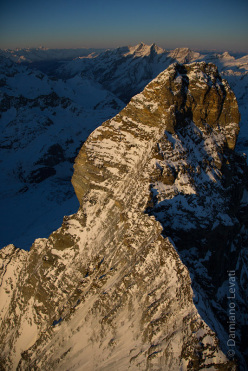 Hervé Barmasse, interview after the first winter enchainment of the 4 Matterhorn ridges

Hervé, what an undertaking... where did this project stem from? Did you aim to beat some sort of record or was this a dream of yours?
Most certainly a dream, and if someone wants to talk about records, then this is only a minor detail. What remains are the emotions I felt before, during and after the climb. The mountain gave me a great opportunity, both exciting and highly satisfying. Far more gratifying that the other climbs I've done so far.

Ascent up the Furggen Ridge (first winter solo up the Furggen overhangs), descent down the Hornli ridge, traverse below the North Face of the Matterhorn and then up to the summit once more via the Zmutt Ridge before descending the Lion Ridge to reach the Carrel hut and then descend all the way down Cervinia... in a mere 17 hours (to the Carrel hut). Alone and in winter. For those who don't know these Matterhorn ridges, can you briefly describe the main difficulties of these routes and the project in general?
This winter has been different from those in the past, with far more snowfall than we've seen for a long long time rendering the overall level of commitment more interesting, complicated and risky. In order of importance of difficulties, I'd say there's the awareness of fact that, once you've decided on a solo ascent, you know you simply cannot afford to make a mistake. You have to control the risks, your fears, your strengths and the rhythm of your climbing. Knife-edge crests with waist-deep, unstable snow, past grade V/V+ sections at 4300m through the overhangs, all the while dealing with the cold. The gear in my backpack was whittled down to the bare minimum: a water bottle and two energy bars, 4 Friends, a 40m rope that I then cut down to 23m to reduce weight, 3 slings, 6 carabiners and one ice screw; as well as the ice axe and crampons that I only didn't use on the first pitch up through the overhangs. And, last but not least, I was accompanied by the uncertainty of what lay in store along the Zmutt ridge, a crest I'd never climbed before.

Can you give us a brief outline of the previous Matterhorn enchainments? Dates, chronology, routes, times and - if you wish - your thoughts about these?
This enchainment is only the third, after the one carried out by my father and the other carried out by Hans Kammerlander accompanied by Diego Wellig, a Swiss mountain guide. Three "challenges" that differ significantly from a point of view of the actual climbing, the commitment, danger and physical performance. My father was the first to embark on this sort of undertaking, on 13 September 1985. He certainly deserves credit for having thought up, and then passed on to those who came after him, the legacy of undertakings like these on the Matterhorn. He climbed the 4 ridges alone and also made the first solo ascent of the Furggen overhangs. An ascent marked not only by great commitment and risk, but also speed. 14 hours circa to the Carrel hut, 15 to Rifugio Duca degli Abruzzi from where the Italian route starts. The lines he climbed were as follows: ascent up the Furggen ridge, descent via the normal Swiss route, traverse across the base of the North Face, ascent up the Zmutt ridge and descent down the Lion Ridge. An elegant circumnavigation of the Matterhorn, accomplished without ever retracing his steps. And, I'd like to add, with plastic Galibier boots on his feet and a 12mm rope wrapped around his shoulder.

What about the enchainment by Hans Kammerlander and Diego Wellig?
Kammerlander and the mountain guide Wellig searched for a new record and/or enchainment. They set off on 19 August 1992 with the aim of climbing all 4 Matterhorn ridges in 24 hours. They started at midnight from an altitude of 3424m and climbed the Zmutt ridge, descended the Normal Swiss route to the Hornli hut, climbed the Furggen ridge, descended along the Italian route to the Carrel hut from where they set off to reach the summit before climbing down the normal Swiss route once more, to then climb and descend it another time and reach the Hornli hut just before midnight. Theirs was undoubtedly a physical achievement akin to that of an ultra runner, but objectively speaking with a somewhat different level of commitment and risk seeing that they ascended the routes together and in summer. I myself was taken in by the lines climbed by my father, I liked the idea of climbing this mountain via all four ridges, without ever turning back, following a logical and harmonious line. I wasn't out to set some sort of record, but instead I was after a beautiful, committing adventure; that's why I decided to climb alone and in winter. My 17 hours are the result of my excellent physical form, a clear frame of mind and the fact that I only took with me the bare essentials and had no adequate protection against the cold, that meant I couldn't allow myself to spend too much time on the mountain. I'd considered this carefully. Different objectives, different gear, different seasons and different choices, as a team or alone, render these outings unique.

You were undoubtedly extremely quick, especially considering the fact that you were climbing in winter. Can you give us precise details about each of the 4 ridges?
I set off at 5:45 from the Bossi bivy, reached the summit at 10:10 after having breached the overhangs and self-belayed only on the first pitch. I stopped on the summit for circa 15 minutes. At 14:10 I reached the Hornli ridge. The descent down the Swiss route seemed eternal due to huge amounts of snow, in summer and with clients I usually get down it in half the time. In truth I didn't think conditions would be that bad. I rested for about an hour and then at 15:15 I set off once again and traversed across the base of the North Face. At 16:00 circa I began to climb the Zmutt Ridge and reached the summit at 20:15. Once again the deep snow proved tricky, in particular on the Zmutt teeth and the upper section of the route. At 22:45 I checked my watch again. At that point I was safely in the Carrel hut and my father, who had waited for me at the refuge, was trying to thaw a bottle of beer.

How risky was this enchainment and how did you deal with it?
I'd say very risky, decidedly risky due to the unstable snow. You know the scene from Looney Tunes, with Sylvester the cat who slides down the window leaving his claw marks in the glass? The powder snow slid off the slope on four occasions, allowing me to savour this sort of excitement... Luckily I stopped just in time.

How do you interpret this "speedy" alpinism? Or better still, what form of alpinism is this? Tell us about your attitude in the mountains, do you notice what's going on around you, the mountains, the panoramas? As you know, some believe mountaineering should also be about taking time, about pondering, savouring the mountains and the experience in general. What do you think?
Better gear, improved training techniques and greater knowledge and understanding about the inherent dangers mean that nowadays you can race up a mountain that was previously climbed only over an extended period of time. I believe speed is a quality that alpinists need to have to deal with risky, dangerous situations or climbs that are particularly difficult with heavy packs, where the cold or the altitude coupled with slow progress would otherwise make an ascent dangerous. Up until now I've never pursued a record, never raced against a stopwatch, although I fully respect those who do. Everyone of us needs to pursue their own style and search for their own fun in mountains, while fully respecting the past and nature.

You waited before breaking news about your climb after what happened to Marco Anghileri on Mont Blanc's Central Pillar. When did you hear about this terrible accident? And how did you react?
I learnt about Marco's death from the Aosta Valley Mountain Rescue Service, of which I'm a member. It's a great loss for the entire mountaineering world, an unforgettable void for all those who loved him, for his family. I'm an alpinist and I fully understand what drives someone to go out and do things, what pushes you to try something solo. His death reminded me, once again, of how fragile we are and how important it is to try to live our lives to the full, following our dreams and trying to be true to ourselves, without fear. Just as Marco was doing.

What will you search for in the future, both in alpinism and in life in general?
Let's discover it together?