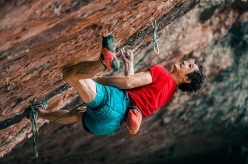 Throughout his famous late 2020 siege of Perfecto Mundo at Margalef in Spain, Adam Ondra also found the time to attempt some other projects. Such as El Potro at the sector El Laboratori, which after his first ascent has been repeated by Alex Megos and, more recently, by Marco Zanone and Buster Martin.

Above all though there’s the long-standing project El Toro Salvaje; this starts slightly to the right of El Potrò and joins this via a crazy drop knee, before finishing up the crux of Chris Sharma's 9b First Round First Minute. The project is still in its early days, but Ondra reckons it could be somewhere in the region of 9c.