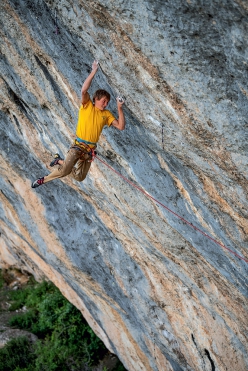 Alexander Megos climbing Bibliographie 9c at Céüse in France. After 60 days of effort this is now the most difficult sport climb in France and only the second 9c in the world.
Photo by Ken Etzel 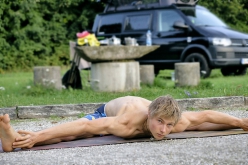 German rock climber Alexander Megos. Born on 12 August 1993, Megos shot to fame in 2013 with the world’s first 9a onsight, Estado Critico at Siurana in Spain. After his first 9a+ a few days later - La Rambla on only his second attempt - his first 9b came in late 2015 with his repeat of First Round First Minute at Margalef. The following year he established his own 9b, Fight club in Canada, while 9b+ dates to 2018 with his Perfecto Mundo. In August 2020 he made the first ascent of Bibliographie at Céüse, the second 9c in the world.
Photo by Thomas Ballenberger 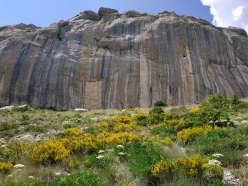 At Céüse in France the German climber Alex Megos has made the first ascent of Bibliographie and suggested the grade 9c. This is now the most difficult sport climb in France and only the second in the world this difficult.

Alexander Megos has left an indelible mark at the mecca of sport climbing, Ceüse in France, with his first ascent of the inordinately difficult Bibliographie for which the German has put forward the grade 9c. Bolted by Ethan Pringle, the route lies immediately to the right of famous Biographie, the world’s benchmark 9a+ freed by Chris Sharma in 2001 and repeated by Megos, somewhat incredibly, on his third attempt and in a single day in 2014.

In order to achieve this result Megos’ track record is obviously a crescendo of athletic prowess, starting from 2013 when he climbed his way into history with the world’s first 9a onsight, Estado Critico at Siurana in Spain. After his first 9a+ a few days later - La Rambla on only his second attempt - his first 9b came in late 2015 with his repeat of First Round First Minute at Margalef. The following year he established his own 9b, Fight club  in Canada, while 9b+ dates to 2018 with his Perfecto Mundo. Preliminary indication of the route's difficulty comes from the fact that the 26-year-old needed 16 days to free Perfecto Mundo. For Bibliographie he needed 60.

While it’s true that there are several other routes that were first ascended by Megos at Céüse, such as the 9a Et dieu créa la Flemme, his Bibliographie will certainly stand out as something truly special. And not only because it’s the most difficult route at the most beautiful crag in the world!

Sometimes the odds are against you, but it doesn't mean you don't have a chance. Yesterday evening, on my last day of the trip, it definitely wasn’t looking good after messing up the first (and only) try I wanted to do that day. I fell relatively low on the route though, so I decided to give it an infamous “one last go”. I passed the crux in the middle of the route, and found myself on the poor rest before the final hard section. Twice prior to this burn I had fallen on the last hard move of the route, so I wasn’t feeling super confident. Nonetheless I started off after the rest with full pace and only briefly slowed down to adjust one hold and to get it perfectly. I passed my ‘trouble move’ seemingly effortlessly and despite being completely pumped out of my mind, I was able to pull off the sequence of the last four moves. After clipping the anchor it seemed like all of the days of work I have put into the route were passing in front of my eyes. With approximately 60 climbing days over the past three years "Bibliographie" has been by far my longest project to date. I know there are many speculations about the grade and I think grades are very subjective. My personal suggestion for the grade is 9c (5.15d). Considering the fact, that "Perfecto Mundo" (9b+) has taken me 16 days of effort, "Bibliographie" with around 60 days and more specific training felt a lot harder. Of course, as the first ascensionist you don't have your perfect beta from the start, you have doubts whether it is possible or not for you, if you are completely missing something, or if you are just not in the best shape. It is always harder to grade something without any other opinion. I am very curious about what the future of the route will look like, and grateful for other people's opinions. Independently from the grade, this has been a very valuable experience for me. It marks a personal milestone in my climbing life, one I would have not been able to complete without the support and help of all of my friends and family. Deep gratitude and thanks goes to all of you! (And yes, there is send footage ) Pic @ken_etzel