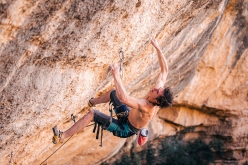 Adam Ondra and Perfecto Mundo at Margalef / The final countdown

Almost perfect conditions at Margalef in Spain as Adam Ondra continues his attempts on the 9b+ Perfecto Mundo.

Some may be tired of watching Adam Ondra on Perfecto Mundo, that's okay. Others though can’t wait to get the latest lowdown of the action in Margalef. planetmountain.com shares the views of the latter group because, after all, it’s not every day that you get to watch one of the best climbers in the world unlock one of the hardest routes in the world.

What makes it all the more fascinating is the fact that this is the first time  Ondra is attempting to repeat a 9b+; up until now Change, La Dura Dura, Vasil Vasil and Silence were all "his" creations. Furthermore, Ondra is pitting himself against something that is, as he himself readily admits, definitely not his style. Monodoigts and two-finger pockets are not the 27-year-old Czech champion’s forte, but the challenge represented by the route bolted by Chris Sharma, freed by Alexander Megos and repeated by Stefano Ghisolfi and Jakob Schubert is simply too strong. Much like gravity...