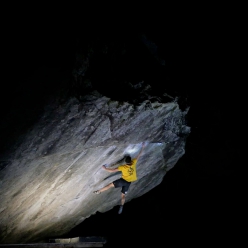 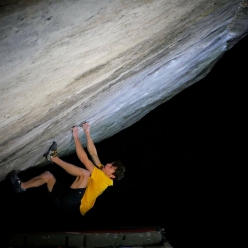 Belgian rock climber Simon Lorenzi has repeated Off the Wagon Low 8C+ in Val Bavona, Switzerland. His is only the fifth ascent after Shawn Raboutou, James Webb, Daniel Woods and Giuliano Cameroni.

Belgium’s Simon Lorenzi has made the third ascent of Off the Wagon Low, the 8C+ in Val Bavona, Switzerland, freed by Shawn Raboutou in 2018 and repeated by Jimmy Webb, Daniel Woods and Giuliano Cameroni.

Lorenzi explained he became "obsessed" with the line after Raboutou’s first ascent and after two days of effort in 2019, he returned this autumn for a few trips. As soon as he stuck the characteristic big move from the stand start he started working the lower section and, on his last session last month, he discovered some new micro beta which suddenly meant that he stood a 50 - 50 chance on what previously was a far lower percentage crux move. Galvanised by this breakthrough he made the 9-hour trip from his home in Belgium to Sonlerto two days ago and, after a three-hour battle and more than 20 attempts, the 24-year-old finally sent the problem.

In February this year Lorenzi made headline news with the first ascent of Soudain seul, the sit start to Big Island at Fontainebleau he graded 9A. That difficulty didn’t stick for long as Nico Pelorson repeated the line in April suggesting 8C+ and indicating that it nevertheless remains one of the best and hardest in the forest.