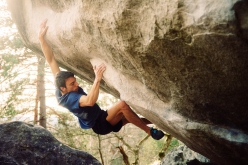 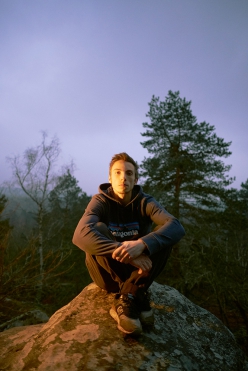 Belgian rock climber Simon Lorenzi has freed the sit start to Big Island at Fontainebleau in France, calling the extension Soudain seul and grading it 9A.

Simon Lorenzi from Belgium has added a sit start to one of the boulders that had most attracted the attention of the world’s climbing elite, the famous Big island at Fontainebleau in France. The bloc was initially climbed in 2008 by the America’s Dave Graham who called it The island, then in 2010 local hotshot Vincent Pochont started two holds lower to create The Big Island. The coveted compression moves go at around 8B+/C.

Lorenzi repeated The Big Island last October, finding a new sequence to stick the famous sloper with his left hand instead of his right, and sending the problem on the fourth attempt on only his second day. Motivated by this rapid success, earlier this year he returned to try the obvious next step which adds a further 10 moves and an obvious sit start. After 6 sessions Lorenzi unlocked the sequence but required 25 sessions in total to link all the moves; this is one of the reasons he believes Big island assis, now called Soudain Seul, may be 9A/V17, putting it right up there among the absolute hardest in the world.

Currently there is only one other 9A boulder problem, Burden of Dreams established by Nalle Hukkataival in Finland in October 2016 and still awaiting a repeat (and confirmation therefore), while No Kapote Only at Fontainebleau, for which Charles Albert in 2019 had suggested 9A, was subsequently downgraded.

"After all the reflexions 9a/V17 looks to be the appropriate grade regarding where is our sport now." Lorenzi wrote on his Instagram channel "Have new kind of reference in a level is something important in climbing. That push the sport further and it's also add a new point of comparison in this grade. As always the time and the repetitions will tell us!"