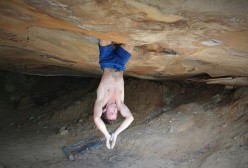 The video of Belgian climber Simon Lorenzi on Quoi de neuf, an 8B + boulder problem at Orsay in France.

It’s quite possibly the most original rest on a boulder problem, ever. No-hands in a horizontal roof, sitting upside down with a double knee-bar and crossed legs. This unique position is obviously to be found on Quoi de neuf, the famous boulder problem at the sandstone bouldering area Orsay, south-west of Paris, discovered by master Jacky Godoffe who originally climbed the bloc in two sections, before Rémy Bergasse linked the two in 2008.

Simon Lorenzi repeated the problem in early September. The 23-year-old is part of the new breed of talented young Belgian climbers on the rise, and in addition to problems such as Dreamtime at Cresciano and Satan I Helvete Low at Fontainebleau, he’s redpointed up to 9a. While his first of this grade, Action Directe in Germany’s Frankenjura, dates back to 2017, he’s definitely one to watch out for in the future.

05.06.2020
Anak Verhoeven frees Kraftio, the hardest climb in Belgium dedicated to Chloé Graftiaux
Anak Verhoeven has made the first ascent of Kraftio, an old project in Belgium. Graded 8c+/9a it is currently the hardest climb in the country and is a tribute to Chloé Graftiaux, the talented Belgian climber who perished in 2010.