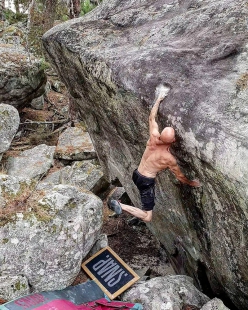 The video of French rock climber Nico Januel who has made the first ascent of Le sens de la fête 8B+ boulder at Fontainebleau.

Nicolas Januel has made the first ascent of what promises to become a highly sought-after testpiece at Fontainebleau, France. The former trainer for the French climbing team started working the bloc at the Dame Jouane sector in summer 2020 but conditions and lockdown prevented him from linking the minuscule crimps and sloper finish until two days ago.

Le sens de la fête settles in at 8B+ and although Januel powers through it with disarming ease, don’t be fooled; with three 8C's under his belt, the 37-year-old has fingers of steel, as illustrated clearly in the second video where he performs two-finger campus boarding on edges that are only 8mm wide…!