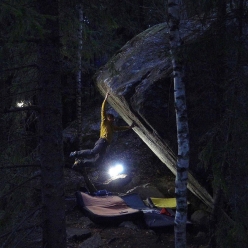 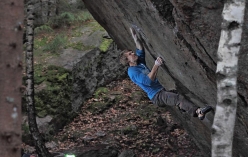 Finnish rock climber Nalle Hukkataival has made the first ascent of Burden of Dreams, his project at Lappnor in Finland, for which he has now suggested 9A. Should the grade be confirmed, this would be the first boulder problem to breach this difficulty worldwide.

The news hit like a bombshell and is what all boulderers have been anticipating for years: Nalle Hukkataival has freed his ‘Lappnor project’, a sheet of overhanging rock criss-crossed by the tiniest of crimps that now have a name and a grade: Burden of Dreams, 9A. Should this be confirmed - one day in the distant future - then this would mean that the 30-year-old from Helsinki has just become the first climber in the world to breach these unheard of difficulties.

It’s superfluous to say that Hukkataival is one of the world’s foremost boulderers, a legend in his own right who for years has been exploring the world in search of the perfect boulder problem. The quantity of 8C’s freed and repeated by Hukkataival has few equals, also in terms of the speed in which he makes his sends, and during his globetrotting trips he has left his mark pretty much everywhere, from Fontainebleau to Magic Wood, from Rocklands to Red Rocks, via Hueco Tanks, Bishop, Grampians… And also Varazze where in 2014 he checked in with the third ascent of Gioia, recognised as the world’s first 8C+, after the ascents of Christian Core in 2008 and Adam Ondra in 2011. And also Maltatal, where in 2014 he made the first ascent of Bügeleisen sit start, stating that at the time the line "could be the hardest thing I've climbed."

Ironically, Hukkataival discovered the perfect boulder years ago close to home, in Finland's Lappnor region, thanks to his friend Marko Siivinen. In 2013 he described it as "a very pure boulder with straight forward and thuggy frontal climbing. No trickery, just raw power!" With grit, determination and unwavering dedication he attempted the project every spring and autumn season, slowly managing to understand the intricacies and subtleties of its moves, often alone.

In May this year he managed to climb the problem in two sections, but he was then forced to put the project off to a later date as friction, even at night, simply wasn’t good enough. Yesterday Hukkataival managed the send, and today he described his historic feat as follows: "Waking up today I can’t help but look at the world with different eyes. Having achieved the first ascent of Burden of Dreams marks a new level in my climbing. With a handful of existing 8C+ boulders in the world, proposing 9A is the logical step."

Yesterday I had another session on the Lappnor project. The routine that goes into it after all this time isn’t all that exciting; the same warm up, driving an hour on the same road, brushing the all too familiar holds, re-warming up, systematically trying the same sequences in the same order. Some days you feel strong and confident and get totally shut down. Other days you’re not feeling a 100 percent and it could be the best session you’ve had. All logic seems to have gone out the window a long time ago. Many sessions I wish I could forget. Can’t do a move I’ve done countless of times before. Last highpoint was a year ago. Weeks and months turned into years of uncertainty and self-doubt. Trying to keep that little spark of hope in the back of your mind alive. Walking up to the boulder with all the positivity I can muster, I still can’t ignore what the boulder has become to represent; failure of varying degrees. Sitting under the boulder I can feel the weight of it. Pulling on always feels like a déjà vu, like the thousands of times before. It always starts the same way and ends the same way. Except this time. This time was different. Snap to reality, I’m hanging on the lip of the boulder, disoriented, heart racing. Contain the panic. I’m on top of the boulder trying to grasp how I got there. Lots of feelings coinciding; surprise, relief, happiness, confusion. As reality hits that quickly turns into ecstatic happiness with a dash of disbelief. Waking up today I can’t help but look at the world with different eyes. Having achieved the first ascent of Burden of Dreams marks a new level in my climbing. With a handful of existing 8C+ boulders in the world, proposing 9A is the logical step. Huge thanks to my friend Marko Siivinen for showing me the line! What a journey it’s been! Stay tuned for a film of the whole story with the boulder. It will be something extraordinary. @blackdiamond @lasportivagram #liveclimbrepeat #weareisland