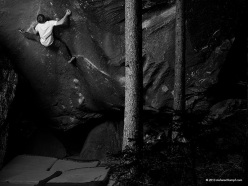 Nalle Hukkataival is undoubtedly one of the strongest boulderers in the world at the moment. Confirmation, were this still to be needed, comes from the depths of Magic Wood in Switzerland where in a brace of shakes he has come up trumps on two 8C problems. A grade, it's worth remembering seeing the speed with which the Finnish climber topped out on both, which is extremely close to the absolute limit, currently considered 8C+ of which there are only two: Gioia by Christian Core at Varazze in Italya and Terranova by Adam Ondra at Kras in the Czech Republic.

The first problem which Hukkataival sent happens to be one of the most obvious lines in the forest, a "highball" which had caught his attention during his first visit back in 2004 but which seemed impossible. Until last Saturday when, after a few days of attempts, Hukkataival finally unlocked the sequence to free The Understanding. He told planetmountain "it's most likely in the 8C range. Time will tell."

But more was to come because a day later Hukkataival made the first repeat of La Force Tranquille, the 8C problem put up by America's Daniel Woods in October 2011. If you watch him closely on what he describes as "one of the best hard boulder problems out there!" one gets the impression that Hukkataival has a harder time with the slab finish than the minuscule crimps below!