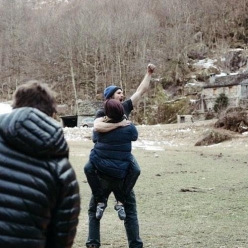 Daniel Woods celebrating after having made the third ascent of Off the Wagon sit 8C+ in Val Bavona, Switzerland after Shawn Raboutou and Jimmy Webb
Photo by Mary Mecklenburg 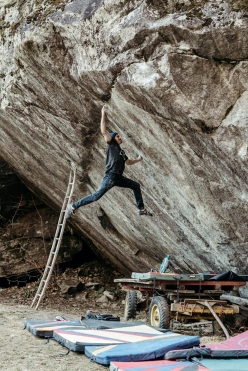 PORTFOLIO / gallery Portfolio: Daniel Woods no slouch on Off the Wagon sit in Val Bavona

American climber Daniel Woods made the third ascent of Off the Wagon sit, the boulder problem freed by Shawn Raboutou in Val Bavona, Switzerland graded 8C + / V16 and repeated in February by Jimmy Webb.

"Top 3 power blocs in the world for me." Don’t take our word, trust Daniel Woods who up in Val Bavona has claimed the third ascent of Off the Wagon sit, the 8C+ boulder problem established towards the end of 2018 by Shawn Raboutou and first repeated by Jimmy Webb only a few weeks ago.

The bloc is located on the huge boulder at the edge of a pristine meadow in the picturesque Swiss valley, made famous by the excellent attempts carried out by Chris Sharma and Dave Graham about fifteen years ago. In 2012 Finland’s Nalle Hukkataival completed the first ascent at 8B+ and called it Off the Wagon, while six years later Raboutou managed to link a sit start from the cart. The single 8A move linked in to the rest warranted 8C+, the first of its kind in Switzerland.

Webb sent the problem with apparent shocking ease, while Woods battled his way through to make the third - American as it happens to be - ascent two days ago. After celebrating the 30-year-old concluded "One of the more exhilarating experiences I have had in bouldering. The power, precision, and accuracy needed to send is difficult to have align in unison."

Maybe one day this power and precision will be used to climb the bloc Off the Ground. Who knows.