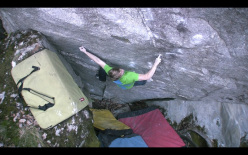 In Ticino, Switzerland's bouldering paradise, Nalle Hukkataival from Finland has established numerous new boulder problems including Momentum 8C and Off the Wagon 8B+ in Val Bavona.

It seems as if no boulder problem can resist him! Nalle Hukkataival is currently in Switzerland's canton Ticino where he is literally devouring a series of difficult boulder problems and projects at a pace which leads us to believe that 8C boulder, at least for this Finnish strongman, is consolidated and almost "easy". And that with the right line and inspiration, there is much, much more in store.

Proof of the power of this insatiable globetrotter (countries visited recently include Poland, Spain, Italy, Australia, South Africa, Norway, Sweden and others in search of the perfect boulder) comes from the first ascents of Simple Life 8B, Momentum 8C and also the famous problem known as the Wagon Project, all in Valle Bavona.

While Hukkataival described Momentum as "one of the most amazing sequences I can think of! So simple, yet so intricate" and "a dream come true for me and one of my biggest achievements" the second problem doesn't have a grade yet but it certainly won't be much easier, seeing that it had been attempted by many including Dave Graham and Chris Sharma. Hukkataival has also found the time for a quick repeat of Heritage (8B+/V14), the problem freed by American Carlo Traversi a few days ago.

Hukkataival's mission in Switzerland doesn't only revolve around cleaning and freeing cutting-edge problems (it's worth remembering that 8C is practically the current limit and that there are only a handful of confirmed 8C+ problems worldwide). Fortunately some of Hukkataival's other problems as easier than the ones mentioned above, such as Bio Spezial 7A+ and Sound of Silence 7A. Above all though, Hukkataival believes they're "awesome".